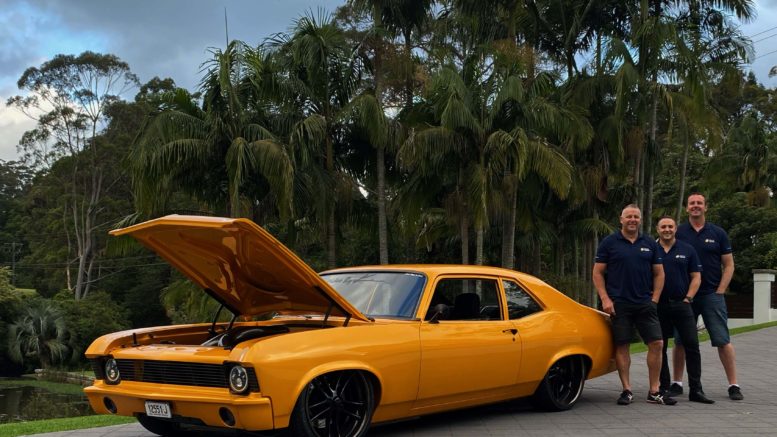 Three Central Coast mates have started a campaign to raise $1M for the Cancer Council, by raffling off a custom-made muscle car.

Ned Restom, Deane Poile, and Adam Barnes, who have had their own brushes with cancer, kicked off the campaign on October 3, with the raffle to be drawn in February.

“Ned and I got together and thought we were both in a good financial situation, so we decided to raise money for the Cancer Council,” Poile said.

“We are into muscle cars and sports cars, so our idea was to buy one and raffle it off.

“Adam Barnes is a good friend of ours, and he is a car guy, so I got a hold of him to talk about selecting a car.

“He got us our very first car (1970s Chevy Nova) which was made by the father and son team, Rides By Kam.’

Poile works as an architect in Sydney and has always been very busy but said COVID gave him the time to organise the campaign.

“It was the perfect time when COVID hit because it was the very first time that I had the time to brainstorm,” Poile said.

“We have so much support from everyone.”

The fundraising campaign has already raised $15,000 in raffle tickets and has attracted a large range of high-profile Australian ambassadors who have used their own experiences with the illness to draw attention to the cause.

“We have had so much support from the community, especially from the makers of the car, Rides By Kam,” Poile said.

“They said they love what we are doing and will support us and do whatever it takes to get the message out there.”

As a cancer survivor himself, Restom said he felt compelled to do his bit by raising money for research into the prevention and treatment of the disease.

“One in two Australian men and women will be diagnosed with cancer by the age of 85, which is quite frankly, a shocking figure,” he said.

“We want Customs 4 Cancer to play an active role in bringing down this statistic.”

Customs 4 Cancer is the men’s first organised campaign, but Poile said they have big plans for the future.

“The goal is to create a website which will have a database of stories on how people are living with cancer,” he said.

“The idea is that you can go to the site and you can find others who have also suffered from that same type of cancer.

“For example, Ned’s story about how he has got through, what happens on the day you find out, all of those things will be in the video.

“We want it to give people a better break down on what is going on.

“Donating to Cancer Council is extraordinary and on top of the list, but a very close second is giving the car away to someone.

“Handing the car over to someone who has loved cars their whole life and has bought a $25 ticket will be something else.”

Tickets are $25 and can be found at website raffle4cancercouncil.com.au.

The critical importance of preconception nutrition