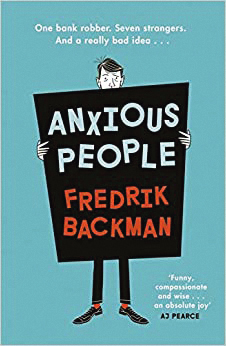 The very beginning of this book states, “This story is about a lot of things, but mostly about idiots.”

I know what an idiot is, but just so I was clear, I looked it up thinking maybe the word had been morphed in recent times to become something else (like sick now means good).

However, just as I thought, it means a stupid person.

I felt like an idiot for looking it up.

I am going to try to summarise Anxious People without sounding like an idiot (which is not easy because this is a strange book).

In a small Swedish town there is a failed bank robbery, but the robber isn’t trying to get millions of kronor – this robber only wants six thousand five hundred, a specific sum of money for a specific reason.

Not being a seasoned criminal, the bank robber picks the wrong bank.

While escaping they run into an apartment building and right into an open house inspection.

The people viewing the apartment are a rag tag bunch who seem to have a lot of baggage.

Along the way there are the keystone cops that appear to bumble through the investigation trying to uncover what exactly has happened before the special investigative team from Stockholm are dispatched, “… being a Stockholmer was more a state of mind than a description of geographic origin. Not all idiots are Stockholmers, but all Stockholmers are idiots, as people said at the police station. Which was obviously extremely unfair. Because it’s possible to stop being an idiot, but you can’t stop being a Stockholmer.”

Interspersed with the robbery and the police interviews is the story of a man jumping off a bridge ten years earlier.

Someone tried to save him but failed.

Later a young lady tries to jump off the same bridge, but she is saved.

The beginning of the book gripped me.

The writing was witty and touching.

Then the police interviews began, and I started to get annoyed.

The people being interviewed were rude and obnoxious.

I started to detest the characters, and when that happens a book is lost to me.

But I persisted, and I am glad I did.

When I thought the story was going one way it changed direction and really grabbed my attention.

It was full of hope and compassion and humanity.

Fredrik Backman wrote “A Man Called Ove”, which was great!

This is the forth book of his that I have read and each time I am hoping to get another “A Man Called Ove”, and although the stories are good they never touched me as much as that story did.

But this one came close.

There are some really great insights in this book that will make you think, one I particularly liked, “The truth, of course is that if people were as happy as they look on the Internet, they wouldn’t spend so much damn time on the Internet, because no one who’s having a really good day spends half of it taking pictures of themselves.”

And that is why I have very few pictures on the internet.