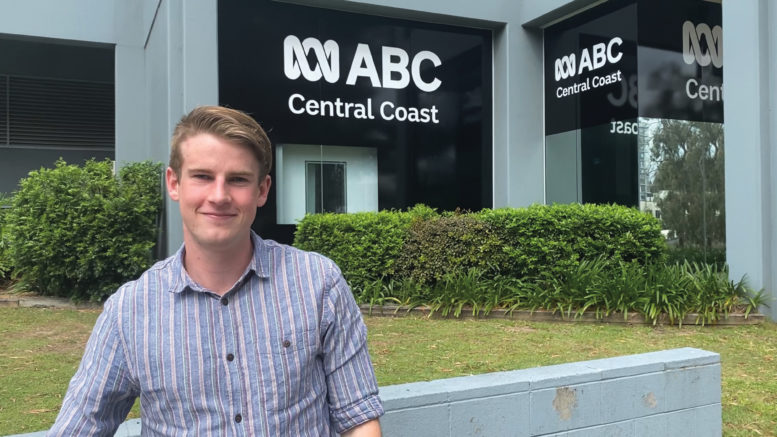 Jake Lapham outside the ABC studio in Gosford

ABC Friends Central Coast branch is encouraging Central Coast residents to let local MPs know how important the public broadcaster is to them with services such as the 7.45 am radio news bulletin being cut by a reduction in real funding to the ABC.

The branch has released a statement that stresses the past few years have increasingly demonstrated the vital service provided by the ABC to communities and the nation.

“The ABC is our national broadcaster and all Australians own it,” the release says.

“It plays an essential role in informing and supporting our communities.

“The ABC entertains and informs via programs for all age groups – from the wonderful, informative and funny Bluey, to the groundbreaking Triple J, the insightful and human Australian Story, Back Roads that takes you to places and communities you may never have heard of, Radio National, rage, the women’s cricket, football, netball and the Paralympic Games, as well as state and territory Anzac Day coverage across the nation.

“It is very difficult to imagine our country without these amazing shows and services.”

The branch emphasises that the ABC also protects us.

“4 Corners has, for over five decades, delivered programs that matter to all Australians,” the release said.

“The ABC’s amazing journalists help protect our nation and its people with their ongoing investigative work – work that has resulted in Royal Commissions as it shines a light on corruption and fraudulent behaviour in aged care sector, juvenile justice, the banking industry and child abuse, to name but a few.

“We are a better nation thanks to the ABC and its staff.

“Now in its 88th year, our ABC has delivered a consistent, excellent, diverse and modern service to the suburbs, the cities, the regions, the bush and the outback.

“As a country, we are fortunate to have such a service, and any attempt to undermine it should be resisted wholeheartedly.

“As a citizen of this country and a member of our community, there are things you can do to ensure the ABC will be with us for many, many more years, delivering these services.

“If you care about your ABC please take action now by emailing, phoning or writing a letter to your local federal MP (Emma McBride in Dobell, and Lucy Wicks in Robertson), the Prime Minister (Scott Morrison) and the Federal Treasurer (Josh Frydenberg) and tell them why you trust the ABC, how you rely on the ABC and why ABC funding must be restored, in particular the recent $84M cut.”

Central Coast councillor and retired firefighter Jeff Sundstrom has added his voice to the call.

“I am very impressed and will always support the role of the ABC as our local emergency broadcaster,” he said.

“The local knowledge that our Central Coast ABC brings to that role is invaluable.

“As a councillor having our ABC allows locals to have a wide ranging and widely heard conversation about the issues that matter to us.”

This week, Coast Community News said goodbye to ABC journalist, Jake Lapham, who has been relocated to regional NSW.

We wish him luck in his new adventures.