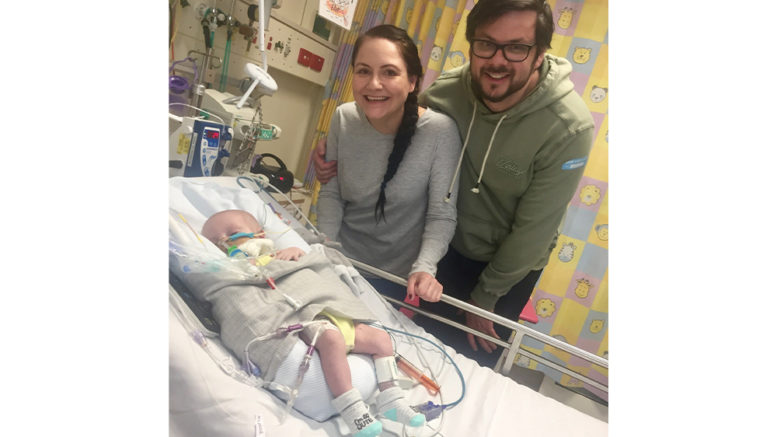 Shelly Bennett and Travis Sanders with their son

For many expecting families, the prospect of having a baby during the biggest health crisis in living memory is scary enough, but what if your newborn arrived with serious complications?

That was the reality for Halekulani’s Shelly Bennett and Travis Sanders, who’s newborn son Elliott, was born with half a heart.

Known as hypoplastic left heart syndrome or HLHS for short, HLHS is a severe congenital heart defect where structures within the left side of the heart are critically underdeveloped.

In a healthy heart the left side has the job of pumping oxygenated blood into the aorta, the main artery that carries blood to the body, while the right side pumps returning low oxygenated blood back to the lungs for reoxygenation; but in the heart of a child with HLHS, the mitral valve, left ventricle, aortic valve and first part of the aorta, are all extremely small or have not developed at all.

This places pressure on the right side of the heart to takeover both types of pumping, but with the right not designed to take on such heavy duty work, a series of correctional surgeries is required to reconstruct the left.

That was the case for Elliott, who had his first open heart surgery at just four days old.

Two more surgeries, a near death experience and more than 130 days in hospital later, Shelly and Travis have finally been able to take Elliott home, or as close to home as they can get, with the family staying in temporary accommodation close to Westmead Children’s Hospital for regular check-ups.

Dreaming of the day she’ll be able to reunite her family on the Coast, it’s Shelly’s hope that her family’s story will help raise awareness of congenital heart disease and the hardship it brings.

“I can’t even describe what it was like to be told our baby only had half a heart,” Shelly said.

“After having three healthy girls it was a shock.

“We had never heard of HLHS before.

“Once diagnosed, we had to relocate to our temporary accommodation when I was 37 weeks pregnant so that Elliott could be transferred for immediate treatment.

“He needed medicine to keep his heart open and allow blood to flow or he would deteriorate and die.

“I gave birth alone and got to hold my baby for one minute before he was taken away from me.”

With pandemic restrictions in full effect, the couple then had to struggle through separate ordeals.

For Shelly, it was staying by Elliott’s side, dealing with the full weight of the situation alone.

For Travis, it was trying to keep things together for their three girls whilst dealing with the constant pain of not being with his partner and son.

“With Covid restrictions the hospital only allowed one parent at a time to be in PICU and no kids, so Travis and I could never see Elliott together,” Shelly explained.

“I had to walk him to surgery alone, twice.

“I sat by his bed alone.

“We weren’t even allowed to be together to discuss Elliott’s care, it had to be done on the ‘phone.

“Our girls didn’t meet their brother until he was 6-weeks-old after he almost died, and we were told we may have to let him go.

“It was the first time we’d all been together as a family.

“For months, I just spent days and nights in Westmead, crying and feeling so alone because I couldn’t have Travis with me, and I couldn’t see my girls.

“The things I had to watch them do to Elliott, I can’t even describe how it felt.

“I just feel so raw from what we’ve gone through,” Shelly said.

But with that rawness has come a determination to see more recognition of congenital heart disease and the impact it has on young lives, with Shelly and her family eternally grateful that Elliott still has a life ahead of him.

“Elliott’s heart can never be fixed, only made to function so he can live, and we don’t know if he will make it because with congenital heart disease there is no guarantee, but the doctors at Westmead have given him a chance at life and we are so grateful for that.

Knowing the road ahead will be hard, Shelly said her family had a renewed zest for life.

“This experience has shown us how quickly life goes by and how each day is so unknown.

“I feel different, I feel stronger and I’ve changed as a person, because I had to.

“I couldn’t go through this experience and see the things that my son has endured and be the same person.

“With what I’ve seen in the hospital, all the babies and children who are sick and just want a chance to live, all the small things just don’t matter anymore.

“Elliott is the happiest little boy and an absolute delight.

“He is worth every second of this.”

Over 200 performers on 3 stages at 20th GOATS festival