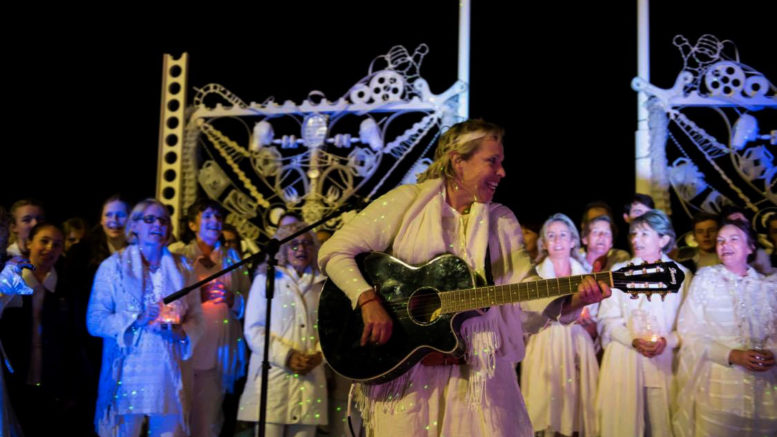 Composer and filmmaker Yantra de Vilder of Avoca Beach has had her film Home A Place Of Belonging accepted by two major overseas film festivals.

Largely born of her involvement over the past four years in the 5 Lands Walk, the film is a celebration of the Central Coast community and has been accepted for inclusion in the Around Films International Film Festival in Barcelona, Spain, and the Paris Lift-Off Festival.

“I feel like I’ve been working on this film for the last three years,” de Vilder said.

“I have been composing music specifically for the 5 Lands Festival official opening for the past four years and have spent a lot of time developing it.

“In June  2019, we chose to do the opening at Avoca Beach Picture Theatre because we thought it was going to rain and we filmed and recorded it.

“Little did I know then that COVID-19 was looming.

“Since June 2019 I have pulling what I had together as a film, doing a lot of production work on it.

“And then when COVID broke out and we decided we couldn’t do the 5 Lands Walk this year, I decided to release film as an online event on what would have been the night of the opening ceremony.

“We had an amazing number of views that night – around 400 – so I began promoting it as an online experience while everyone was in lockdown.

“But then I didn’t know what to do with it next, so sent it to a few different film festivals not knowing what would become of it.

“I feel it is an important work as it is a symbol of reconciliation and connection within the community.

“It explores our cultural diversity, incorporating a range of cultures including Indigenous, Chinese, South African and Celtic and I was supported with a grant from Multi Cultural Arts NSW.

“It is wonderful to get international recognition for the work.”

With a background as a composer, de Vilder completed a doctorate in creative arts and now sees herself as a “one stop shop”.

“I am producer, director, composer, filmmaker and animator – I do it all,” she said.

She is currently working on a film clip of a new song she wrote for this year’s 5 Lands Walk opening ceremony called Walk With Me, a collaboration with other musicians and a choir.

“Because of COVID we have had to film it in different section,” she said.

“It’s a whole new way of operating which I’m quite enjoying.

“I feel like I’ve been training for this for years, after having worked for some time with the ABC, doing projects largely online.”

She is also working on another project in the virtual reality space and building a new recording studio at her Avoca home.