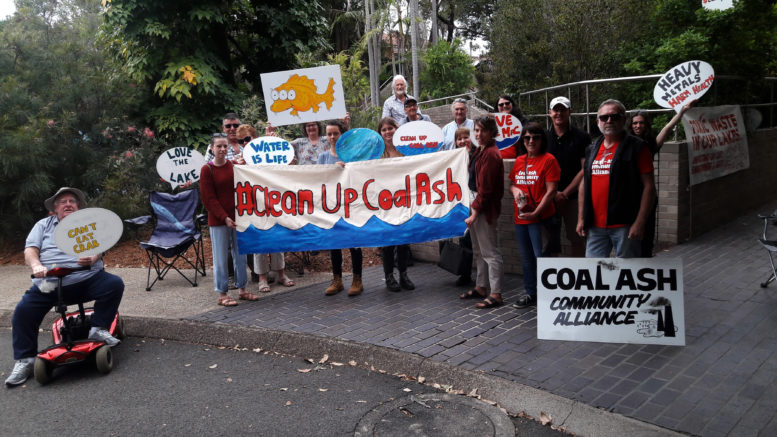 The Out of the Ashes II report by Hunter Community Environment Centre estimates that 302 tonnes of harmful heavy metal pollutants will leach into Lake Macquarie from the region’s two active coal-ash waste dumps between now and the planned retirement of the power stations.

The report, released on Monday, October 19, says the shores of Lake Macquarie are burdened with the largest quantity of coal-ash waste in Australia, with a combined 100 million tonnes from Vales Point and Eraring power stations.

Delta Electricity’s Vales Point Power Station ash dump at Mannering Park is the largest in NSW, containing an estimated 60 million tonnes of ash waste, with an estimated 720 tonnes of heavy metals going into Lake Macquarie since it was commissioned in the 1960s.

Vales Point has a re-use rate of about 26 percent per year and uses outdated methods of ash transport, wetter, rather than drier, which exacerbates heavy metal leachate pollution, the report said.

The ash dump at Origin Energy’s Eraring Power Station is estimated to contain 40 million tonnes and predicted to have already leached almost 685 tonnes of heavy metals into Lake Macquarie.

At 35 percent, Eraring has the highest ash re-use rate in NSW.

However, it is predicted that an additional 205 tonnes of harmful heavy metals will leach into the lake between now and its planned retirement in 2035.

Eraring’s ash dump is reaching capacity and in 2019, Origin applied for an ash dam expansion which will only accommodate additional ash until 2024.

The closure of Myuna Bay Sport and Recreation Centre in 2019 was triggered by the risk of catastrophic collapse of the Eraring ash dam wall in the event of an earthquake.

Environment Centre spokesperson, Jo Lynch, said the NSW Government had known about water pollution from coal-ash for at least seven years and the NSW Environment Protection Authority (EPA) had been allowing high concentrations of harmful heavy metals to enter waterways.

“Some heavy metals are carcinogenic and linked to species decline,” she said.

“They can affect fish and bird populations through bio-accumulation and toxicological impacts, including deformities, which reduce breeding success.”

Limits on the consumption of seafood from Lake Macquarie are already in place due to the bio-accumulation of selenium in fish, and a recent government study found that cadmium in mud crab has also reached unsafe concentrations.

Dr Ian Wright, water quality expert and Senior Lecturer at Western Sydney University, said that heavy metals are insidious and stubborn pollutants, and are high risk for species and human health due to the tendency for bio-accumulation.

The Out of the Ashes II report also reveals that the NSW Government has long been aware of coal-ash contamination, summarising evidence of extensive groundwater contamination at coal-ash sites published in formerly classified Environmental Site Assessments, completed for NSW Treasury prior to the privatisation of NSW power stations between 2013 and 2015.

The contamination studies completed for NSW Treasury at Vales Point show exceedences of maximum background concentrations for zinc, selenium, cobalt, lead, manganese and nickel and concluded that the ash dump is a primary source of arsenic and selenium in groundwater.

“The NSW Government must act now to increase safe coal-ash re-use and get this poison out of our waterways,” Lynch said.

“The EPA must prioritise slowing the leachate of harmful pollutants into waterways from these coal-ash waste dumps,” she said.

Findings of the Out of the Ashes II report are drawn from public, government and industry data, as well as field investigations completed by Hunter Community Environment Centre.

The report says that coal fired power stations are under reporting to the National Pollutant Inventory, and evading pollution fees.

Under the Load Based Licencing Scheme (LBL), NSW power stations currently pay a mere $150,000 a year in pollution fees for water pollution.

In order to create an adequate incentive to address the problem, we believe that power station operators should be paying a combined LBL fee of $150M a year for the metals leached from coal-ash waste dumps, the report said.

The full report is available online at hcec.org.au/out-of-the-ashes-ii

An Inquiry was established in October, 2019, for the NSW Public Works Committee to investigate and report on the costs of remediation of coal ash repositories in NSW, including Vales Point and Eraring.

Two public hearings have been held already, the latest at Lake Macquarie on October 6, and a report on the Committee’s findings from the Inquiry is expected by mid-year 2021.