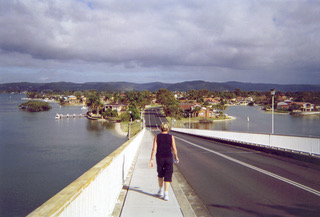 A new community action group on St Huberts Island, the Bridge Warriors, is calling on Member for Robertson Ms Lucy Wicks to intervene in a dispute over an upgrade to the St Huberts Island bridge.

The group is asking Ms Wicks to intervene before a Federal grant is signed off to enable Central Coast Council to proceed with an upgrade it has planned for the bridge.

Bridge Warriors organiser Ms Lindy Wilson said the group did not want a $900,000 grant spent to install public nuisance barriers designed to prevent people jumping off the bridge into the water.

She said the project would be “a misuse of precious public money”.

“The use of monitored CCTV, with clearer signage, fines for those who do the wrong thing and regular patrolling during summer months would be significantly cheaper, more effective and would not devastate the beautiful aesthetics of the bridge,” she said.

Group member Mr Mike Wade said that the core safety issue with the bridge had been completely ignored.

“The bridge is very old and has a very narrow footpath and no separation or protection from the passing traffic.

“The lack of this protection coupled with the many trip hazards is just an accident waiting to happen.”

Another group member Ms Carol Khouri said the proposed fence design “is incredibly ugly and not in any way in keeping with our beautiful suburbs of St Huberts Island and Daleys Point”.

She said the council had only paid lip-service to community consultation, and had not responded to the community’s wishes.

The St Huberts Island Residents Association has also opposed the project and has continued to press for residents’ views to be respected.

Association president Mr Ken Stewart said: “On April 17, when the association was advised by Council of its proposed galvanised weld-mesh safety barrier, we immediately realised what an over-powering addition this would be to our bridge.

“We advised all the Island residents by letterbox drop showing the proposed barriers.

“There was an overwhelming resident reaction with 223 responses, 160 seen by the association, sent to Council.

“The vast majority of replies from the respondents request the repainting and restoration of the existing bridge balustrade, and were appalled at the proposed weld-mesh barriers.”

As Peninsula News went to press, Ms Wicks released a statement saying that she would meet with Central Coast Council in the coming week and “will continue to work with the residents around St Huberts Island to deliver a safer bridge for all”.