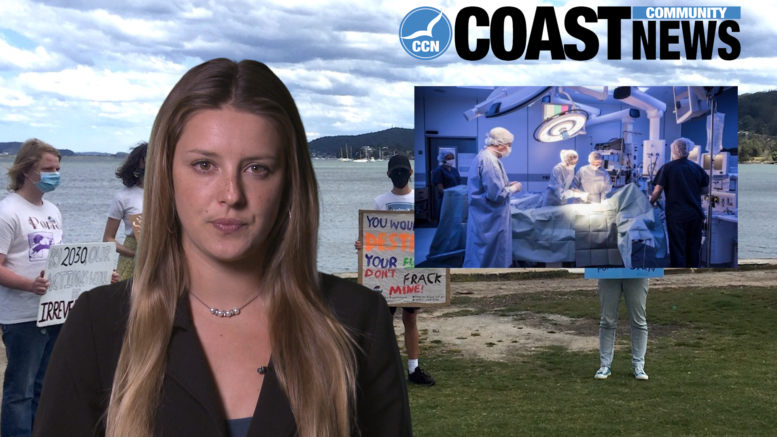 Hi, I am Jacinta Counihan and you are watching Coast Community News 5@5 September 25.

The waiting list for elective surgery on the Central Coast has increased to 353 days, with there being a 400 day wait for those at Wyong Hospital. Also Disturbingly, the waitlist for surgery has hit a record high across the state with over 100,000 patients.

These numbers come after the State Opposition accused the State Government of hiding these issues behind COVID. Shadow Minister for the Central Coast David Harris said it was “appalling” that the Coast was under “such enormous strain. We spoke to both David Harris and Adam Crouch today about their views on how to address the issue in the coming months.

More easing of COVID restrictions in NSW have been released this week, with rules around schools, community sport and weddings being laxed.
Parliamentary Secretary for the Central Coast Adam Crouch told us what this meant for residents and visitors to the region.

Environmental group Save Our Coast has stepped up its fight against a proposal to drill for gas off the Central Coast.
The group has engaged the Environmental Defenders Office to send legal letters calling on State and Federal Governments for the denial of an application that could lead to industrial-scale drilling off the coast between Newcastle to Sydney.

The letter opposes an application by Advent Energy to extend the Petroleum Exploration Permit 11 to enable drilling within the area.
And in a direct protest against gas, a group of 20 School Climate Strike students from across the Coast took this issue head on today by participating in a national environmental protest called #FundOurFutureNotGas at Gosford waterfront.
Here is what Year 10 student, Jayden Delbridge, who helped organise the protest at Gosford had to say.

Last week we looked at the growing rental accommodation crisis across the region. This week we look at traffic movements during the pandemic that arguably reflect economic and social activity across the Central Coast. Data compiled by our local data analytics firm See Change in Gosford show the dramatic effects that the pandemic response has had on traffic movements. OpalCard data compiled by see-shange shows a remarkable drop off in train usage.

Even now it appears that numbers of people commuting on the train remain well below the same period last year.
The M1 traffic movements also took a major dive in April and have yet to fully recover, as illustrated by this graph; Friday movements in blue and Sunday in red. However movements are recovering to pre-covid conditions quickly as car travel is deemed safer than public transport. Gosford Parking station – The only paid general parking station owned by Council in Gosford provided the following data. This See-Change graph shows a massive fall off of parking station usage and still is a long way from returning to it’s normal capacity of 800 car parking spots.

With the Central Coast experiencing on average 30% student mobility, Brownlee said that having a consistent template for how to deal with these issues across all schools will ensure no child falls through the cracks.

Now moving on, let’s move on to Hayley for this week’s sport and weather

Thanks JC. Central Coast Heart Opens team has made it nine from nine after trumping the Panthers 69-46 in Round 9 of the Origin Energy Netball Premier League. Heart Club Captain, Alicia Walsh, said the Opens’ girls defended their undefeated record with a sensational display of netball.

The Central Coast Crusaders Youth League Men have been crowned champions in the 2020 Spalding Waratah Basketball League. A first in Crusaders history, all four of the club’s senior teams were on court for the finals series, which were played at Sutherland Basketball Stadium over the weekend of September 19-20.
The Central Coast Roosters will take on the North Sydney Bears in the Harvey Norman Women’s Rugby League Premiership Grand Final this Sunday at Bank West Stadium in Parramatta. The Final match will round off a six-game season between seven of the best New South Wales clubs, followed by a four-week finals series that has brought the underdog North Sydney team up against the undefeated Roosters.

It’s official; the flags are up and Surf Life Saving volunteers will begin patrolling the Coast’s beaches tomorrow as the 2020/21 beach season gets underway.

And in weather, tomorrow is looking a little windy, with the temperatures dropping a little lower than today.

Overnight it will be 6 degrees coming into 19 degrees as the sun comes up. Winds will be westerly 30 to 45 km/h. Sunday Partly cloudy, tops of 17, with westerly winds 15 to 20 km/h turning southerly later in the afternoon.

Back to you JC

Now some inspiration for you all, local frustrated triathlete, Stacy Harsh, has given up waiting for COVID restrictions ease to allow her to do a half ironman event, inspiring her to do her own triathlon starting at Terrigal haven tomorrow at 6.30. She is raising money for the local mental health charity ARAFMI and aims to inspire others to get out there and exercise for their own mental health so if you see her out there, give her a shout.

For more details on all these stories head to our website and subscribe to our socials for updates during the week and remember to pick up a copy of this week’s Coast Community News and Coast Community Chronicle.

And our ending story today, Justice Crew, was in Gosford yesterday for the official reveal of the youth centre, MMAD’s, new dance floor.

We spoke to the organisation’s co-founder Dominic Brook and two of the Justice Crew Members about the new space and what it will mean for the kids.

Thanks for watching, see you next week.

Shoes made from ocean plastic get a kick along