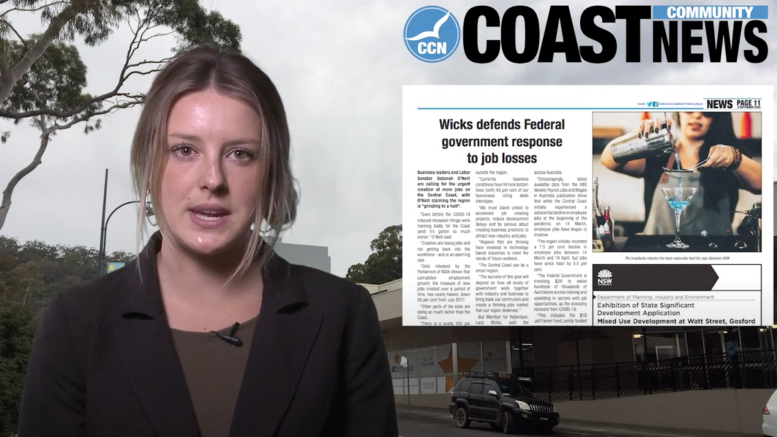 A Central Coast teenager has tested positive to COVID-19 earlier this week. The teenager contracted the virus through household contact with a Central Coast man, who last week, took a train from Woy Woy to Sydney on two consecutive days, picking up the virus from a CBD cluster. Central Coast Local Health District says there is no public health threat from this new case.

These recent cases do highlight the discussion about masks on trains. In a statement this week, the labour state opposition called on the Premier to make mask-wearing on trains compulsory but the Premier has resisted the call so far. Signs have been put up at trains stations across the Central Coast, requesting people to wear masks while travelling.
David Abrahams visited Gosford station earlier to investigate.

The ripple effect of the international and domestic travel ban is being seen first hand, right here on the coast, with flocks of people visiting the areas most popular tourist hotspots over the weekend. Data taken from the data analytics company, SeeChange, shows that Airbnb occupancy rates in most seaside suburbs have recently been as high as over the summer holidays.

Undoubtedly, this increase is a great boost for local businesses, bringing money to the Central Coast economy. On the other hand, it raises the question on whether these large gatherings pose a health risk to our community, as it did back in April and May when Sydney-siders were asked to stay away.

Yes, thank you JC. As we highlighted last week the unemployment and underemployment data is challenging to understand.

Official data released this week showed Australia’s first economic recession in 30 years with a remarkable 7 per cent economic contraction in the second quarter.

The debate between Senator O’neil and the Local government MP Lucy Wicks in today’s paper reflects real community concern about the state of the local economy and the jobs market.

It’s a difficult debate in which to be precise.
With the official employment data seemingly conflicting with the separately collected payroll and job keeper/seeker data. Central Coast based data analytics company See Change shows 7,630 unemployed on the Central Coast, yet jobseeker data shows 23,956 recipients were receiving jobseeker and youth allowance benefits.

In a national response, the Federal government has extended it’s JobKeeper and Jobseeker programs to at least March, albeit at reduced rates.
The level of state government spending on infrastructure is set to continue across the region in an effort to maintain the economy.
One thing is certainly an increased focus on employment creation is set to continue. Here at Central Coast Newspapers, we’ll be looking to highlight some of the green shoots around the region

Thanks David yes Green shoots are popping up in our CBD with multiple cafes and restaurants leading the way in breathing life back into Gosford, with new establishments opening their doors, and others, extending their hours into the weekend.
Bouffant Bakery, Coffee Port, and Apricot Cafe are just three of the businesses that have opened in the last two months, after observing an influx of locals and tourists in the region.

These are among the over 15 other cafes offering barista-made coffee, such as Recess Cafe, South End Social, and Shop 3. You can find over 10 restaurants serving anything from Korean BBQ to Tantellini pasta, and the Bon Pavillion, Bay Rd and Fredricos are just some places you can find a good craft brew or a cocktail.

This rise in establishments could be attributed to the development of surrounding infrastructure, the increase of people working from home, and the inability of people being able to travel domestically and overseas.
And in more positive news for businesses, Central Coast Entrepreneur, Bruce Cotrill, is part of organising this month’s sustainability showcase. We spoke to one of the speakers from Star Scientific at Killarney vale.

After much community consultation, construction on a new state-of-the-art play space at Susan Fahey Park in Copacabana has begun. The district size play space is among many others around the Central Coast already constructed, thanks to funding from the NSW government and Central Coast council. Keren Tucker, Unit Manager for Council, said she excited about the joy this new park will bring to the community.

The Development Application for the new regional library in Gosford has been lodged with the state government, and if approved, demolition will begin in February and construction in August.
We spoke to Mayor Lisa Matthews about the development.
Now moving onto sport, here’s Hayley
Back to you JC

In a boost for the diversity of sporting pathways on the coast, the Central Coast Academy of Sport is set to partner with three other Regional Academies and Water Polo NSW, to launch a Junior Water Polo Program.
The partnership sees the CCAS join with Hunter Academy of Sport, Northern Inland Academy of Sport, and Southern Academy of Sport to deliver the program with Water Polo NSW for male and female Players.
In rugby union, The Wyong Roos have beat the Cessnock Goannas 20-18 in Round 7 of the Newcastle Tooheys’s Cup to remain undefeated on top of the ladder.

And finally, the Central Coast has cleaned up at Surf Life Saving NSW’s 2020 Awards Of Excellence, with local clubs coming away with six major awards.
Thanks for that Hayley and the Central Coast has enjoyed some summer weather for the first few days of spring. Lets go to Haakon to see if it will continue into the weekend.

Thanks, JC – Temperatures have certainly been warm and this is set to continue into the weekend after some local showers this evening and overnight. Saturday will develop into a warm spring day with a maximum of 22 degrees after an overnight minimum of 11 degrees. Sunday will be partly cloudy with a top temperature of 20 degrees with light winds becoming easterly at 15 km/h. And the fine spring weather is set to continue into next week.

Locals and visitors should be aware that hazard reduction burns wil be conducted across the region this weekend. Here’s some good advice from our local RFS.

All of these stories and thousands more are available on our website and remember to pick up a copy of this week’s Coast Community News issue number 258 and Coast Community Chronicle 204.
Thanks for watching. Be sure to subscribe to our youtube channel for updates during the week.

We leave you this week with a blast from the past. The promotional clip from 90 years ago promoting Woy Woy as ‘The Venice of  Australia’, enjoy.