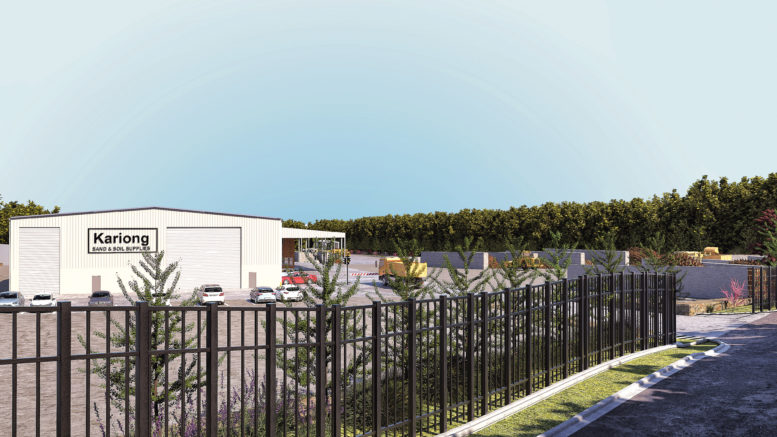 Member for Gosford Liesl Tesch is urging residents to have their say at the 11th hour on a major waste recycling proposed for Somersby, with submissions set to close on September 25.

The proposal, by Kariong Sand and Soil Supplies, at 90 Gindurra Rd, would see a vacant site turned into a state-of-the-art facility converting sand, soil and building materials into 100 per cent recycled building and landscaping supplies.

The company’s website says the products would be provided for re-use mainly in the Central Coast region and the project would create jobs, boost the local economy, divert waste from landfill and reduce illegal dumping.

But Tesch said she was concerned by a recent upsurge in high impact facilities at Somersby.

“In just the last two years we have seen a number of applications to open new waste and recycling facilities at Somersby to cater to Sydney’s growing waste problem,” she said.

“We don’t want the Central Coast to become Sydney’s dumping ground just because we’re a short drive up the M1.

“Too often these developments duck under the radar as they are in industrial areas, but the reality is that noise, dust, and creeping approvals can add up to big issues for nearby residents.”

Tesch said that once approved, many owners seek to accept additional waste by relying on existing approvals.

“We have seen it time and time again, that owners of waste facilities end up getting approval for 50,000 tonnes of waste, but use that to piggy-back future increases which means more waste, more trucks, and more impact on local communities,” she said.

Tesch has called on the NSW Government for a long-term vision for waste across the state.

“All too recently we have already seen the harm caused at the Mangrove Mountain tip by reckless waste management and poor EPA oversight,” she said.

“We can’t let that happen again.”

An Environmental Impact Statement (EIS) provided with the Development Application, which is being considered as a State Significant Development by the Planning Department, say the proposed development can be implemented with minimal adverse environmental impacts and is justified in terms of overall economic benefits to both local, state and national economies.

“The proposal will have positive flow on effects throughout the local economy through the creation of 11 new direct jobs,” the EIS says.

“An economic analysis of the project also suggests that development will inject $73.8M into the Central Coast economy over the next 20 years.”

A fact sheet issued by Kariong Sand and Soil Supplies says the company has amended its application to address community concerns regarding, among other things, dust and noise issues, water quality, the use of Debenham Rd by trucks and possible impacts on Aboriginal Heritage and biodiversity.

The company has also added an advanced water recycling and dust suppression system across the site, the fact sheet says.

The fact sheet also makes a commitment that recycling will increase in stages, only after independent testing is done to prove the facility is performing to the highest environmental standards.

It says the facility will not accept any asbestos or any loads suspected of containing hazardous materials.