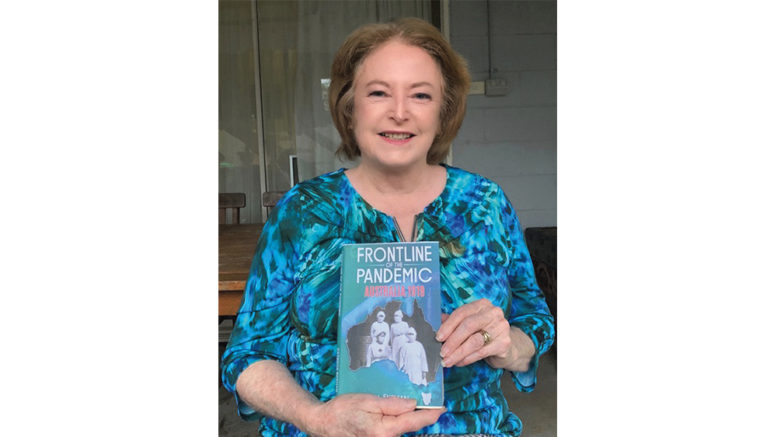 Patricia Skehan with her book

Patricia Skehan of Empire Bay has compiled a series of first-person accounts written by the frontline workers during the Spanish Flu to illustrate the similarities between the 1918 epidemic and today’s COVID-19 pandemic.

She hopes her book, Frontline of The Pandemic: Australia 1919, will help people understand and appreciate the hard work performed by medical staff in hospitals today.

The 168 pages are full of photographs, sketches, cartoons and newspaper clippings written by doctors, nurses, chaplains, reporters, patients and their families who lived through the Spanish Flu epidemic, which swept the world between 1918 and 1920 and infected nearly a third of the world’s population.

“It is like a warning to people to wake up, listen and know that this is real; it has happened before,” Skehan said.

“It is really powerful because it is the voices of people living through the Spanish Flu, and it reads almost like you are reading it about today’s events.”

The letters and accounts touch on themes and events that are currently happening today: school and business closures; travel restrictions; social distancing and wearing masks; overcrowded hospital wards; rising death tolls; and the threat of a second and third wave.

Skehan first started the project back in 2013 after being asked by the granddaughter of Ethel Turner to transcribe a box of letters written by her aunt.

The letters were the firsthand accounts of Jean Curlewis, who wrote about her time as a nurse at a quarantine station in 1919.

Seven years later, when the COVID-19 pandemic started, Skehan decided to pick up the project again and expand her research into more historical accounts from the same era.

“At the beginning of this year, I started looking for more letters,” she said.

“The book includes accounts from the poet Henry Lawson, who was also at the same hospital as Jean Curlewis and wrote from the depths of his despair about what life was like back then.

“He told his story about being in the hospital after surviving a suicide attempt.”

The book includes one patient’s graphic account of surviving the virus and a story about an investigative reporter for the Sunday Times working behind the scenes at hospitals.

Despite consisting of some confronting information, she believes the book is timely and needs to be told.

“It is dedicated to the frontline workers of today who are too busy saving lives to write of their current experiences,” Skehan said.

The book can be purchased through the website frontlineofthepandemic.com

Living in lockdown on the Peninsula

Police to focus on mask rules

$1,500 rebate for greyhound racers whose businesses are impacted by COVID