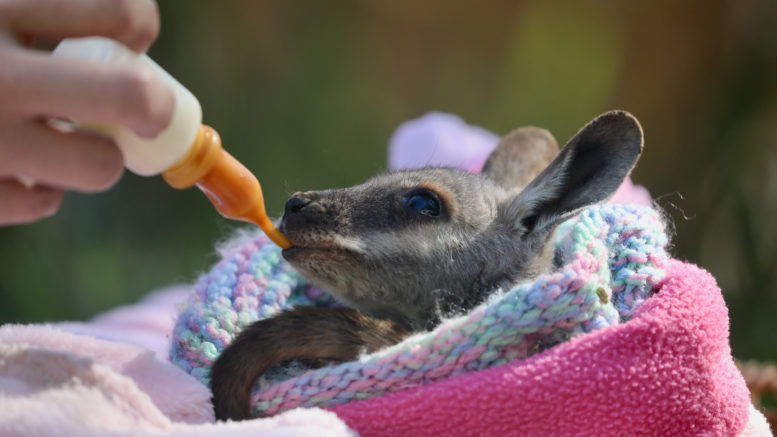 After finding the four-month-old baby joey, Alinta, who was struggling from severe dermatitis and a deadly fungal infection, Barton rose to the challenge as her full-time career.

As the joey’s surrogate mum, Barton fed her specially formulated milk every five hours, including a feed at 2am, and kept her in her knitted pouch.

Alinta has been able to emerge from the pouch and start learning how to hop, but Barton will continue to assist the joey until she is strong enough to re-join the other yellow-footed rock wallabies at the park.

Just like a true mother, Barton said she is proud of Alinta’s recovery.

“There was a time when we really didn’t know if she would recover from her ailments, and it took about four medications until the right one worked, and we saw improvement,” she said.

“Now, she is thriving.

“Alinta already has so much personality, and I love every second I spend with her.

“It’s the most rewarding thing in the world to nurse a joey and watch it become independent, happy and healthy.”

The conservation of yellow-footed rock-wallabies is vital as they now have been placed on the threatened species list.

There are as few as 5,000 left in the wild, with their decline attributed to hunting in the 1800s and early 1900s for their pelts, and in more recent times, the introduction of feral pests such at the fox and cat.