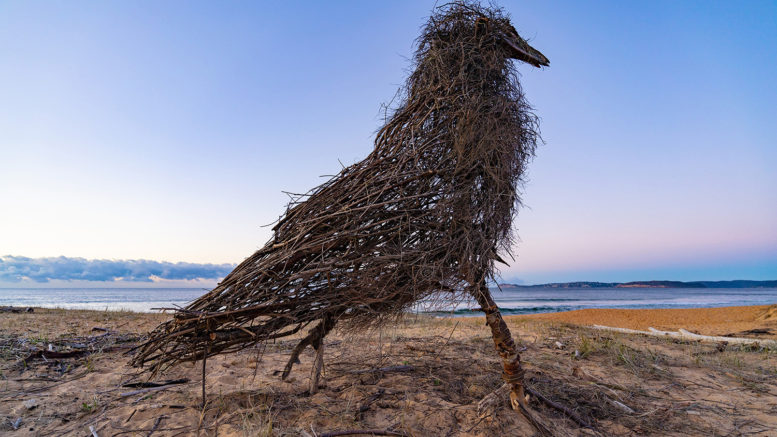 The beach sculptures made by local, Pete Rush, have left many Central Coast residents smiling in awe, and now he hopes he will be able to continue his work thanks to a crowdfunding campaign launched this week.

The proposal for the campaign follows a surprising refusal from a Central Coast Council committee to fund his project.

The money raised will go towards supporting Rush, giving him the ability to continue the project for the next 2-3 months.

His latest masterpiece of a Raven on Killcare Beach stands over 3 metres tall is one of around 15 sculptures Rush has created at Central Coast beaches since the beginning of social restrictions due to COVID-19.

During the shutdown, the Wamberal painter began collecting natural debris washed up from the sea to construct large animal-shaped sculptures.

He said the inspiration behind his creations came from positive feedback from the community.

“I was just down the beach, and I found a piece of driftwood that looked like a horse’s tail, so I just made a little horse,” Rush said.

“Passes by were calling out to me and saying how seeing my sculpture made their day and that they felt so much happier.

“It just happened all day, it was astounding.

“I thought if that’s how people feel, then I will do more, and I just kept going, and they have got bigger and bigger ever since.”

Each sculpture is made using no artificial material, with sticks and logs acting as the base, and the exceedingly robust New Zealand flax from Rush’s garden to tie it all together.

“I have done horses all over the place, but I have also done a mammoth, giraffe, a megafauna bird, and an echidna,” he said.

“There are few others out there that are half-finished that have not worked out; they are hiding in the bushes in a few places.

Rush’s work has been picked up by international media outlets such as The Guardian International and featured around the world with one million views online.

Several award-winning photographers, including Zee Merven, have been following his work and they have been working with him closely to capture the best images.

Rush is still surprised by the attention his personal project has received.

“I am just shocked, and I cannot believe it,” he said.

“Just the joy in people’s faces, it keeps me going, it pushes me on.

Together with community input, Rush is formulating a larger plan for the future of art on the Central Coast.

Central Coast Newspapers is supporting the crowdfunding campaign which is expected to be launched in coming days.