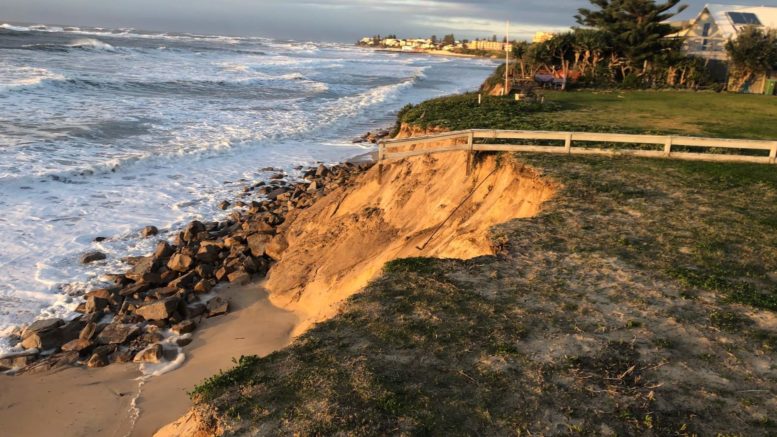 Erosion along the coastline at The Entrance

Central Coast Greens have ramped up their campaign to see planned retreat adopted as the best way to counter coastal erosion, in the wake of storms during July and August which saw some properties at The Entrance North lose up to 10m of their foreshore.

Spokesperson, Stephen Pearson, said the weather event, which also saw beachfront homes at risk of collapse and dozens of residents evacuated at Wamberal, highlighted the need for effective policies.

The Greens’ policy addresses the challenges of rising sea levels and coastal erosion and flooding, and would seek long term actions including stopping development in high risk locations and instituting a planned retreat from high risk areas.

“Allowing continued development and residence in high risk locations is not good for residents or the wider community,” Pearson said.

“It is just not possible to protect every location with sea walls and revetments.

“These are expensive, potentially ineffective and can be destructive to the environment.

“The community should not be expected to pay for sea walls to protect the interests of a small number of residents so that they can live on a beachfront.”

“We would protect public assets and infrastructure consistent with a policy of planned retreat,” he said.

“A planned retreat is a long-term policy that recognises the realities of climate change.

“We understand that this will not be easy for communities in high risk areas, but it is better to have policies that address realities of increasing weather events.

“A frank, honest and equitable conversation needs to be had between the State Government and affected landowners to clarify the status of land titles, both currently impacted as well as for properties known to be under threat from progressively more extensive inundation.

“It means taxpayers’ money is better spent and not wasted on short term amelioration that only lasts until the next storm.

“With increased flooding seen across the Central Coast including Tuggerah Lakes, Davistown, and Woy Woy, we must spend our capital infrastructure monies wisely to protect the many and not the few.

“This policy contrasts with the Liberals, who want to spend ever greater amounts of taxpayers’ funds on a small number of residences.

“We need policies that will deliver for the whole community and offer sustainable outcomes long term.”

Planned retreat is well established throughout the world