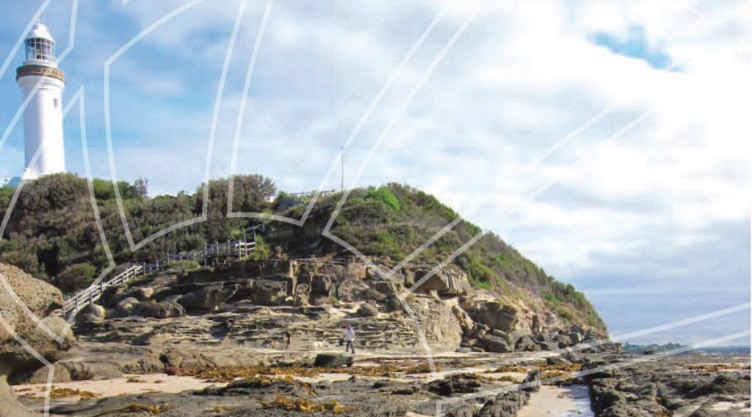 The Norah Head Lighthouse Land Management Board is calling on Central Coast Council and the NSW Government to investigate and address a coastal cliff instability hazard which could put the iconic lighthouse at risk.

Board Chairman, Neil Rose, said that there were some erosion impacts already happening around the headland that could not be ignored.

“To ignore it now and try and address the issue at a later date is going to be far more expensive than if we deal with it now,” Rose said.

“It is an issue that’s not going away and both Crown Lands and Council will need to certainly put a plan in place to manage it.

“The long-term protection of that headland is really important for the whole Central Coast because it is a heritage listed and iconic site.”

Rose said that there was no proposal to protect the lighthouse from coastal erosion in the Wyong Coastal Zone Management Plan 2017 (CZMP), even though, ironically, an image of the headland and lighthouse graced the front cover of the CZMP.

The Board is now calling on Council to include protection of Norah Head in the new Coastal Management Plan (CMP), due to be completed by the end of 2021.

In 2018, the NSW Government established a new framework for the management of coastal environments which requires councils to transition their existing Estuary Management Plans (EMP) and CZMPs across to a new Coastal Management Programs format.

Central Coast Council’s new CMP will combine the EMPs and CZMPs from the former Gosford and Wyong local government areas into one regional Plan.

Rose said the Norah Head Board had a lot of support from Council, however, advice given at a meeting in February 2019 with Council’s Section Manager, Coastal Protection, was to request the Department of Industry (Crown Lands), as owners, to instigate a Plan of Management to protect the cliff face.

“The Department’s response was that its preference was that the coastal cliff instability issues at Norah Head be investigated and managed under the auspice of Council’s CZMP,” he said.

“The Board has made numerous requests to Council to have protection of Norah Head as part of Council’s CZMP.

“First thing we need to do is to get the experts together to come and have a look at some of the serious issues out there.

“The headland is being undercut by erosion and some large boulders are severely undercut and the last thing we want is one of those toppling and causing injury to anyone.

“I’ve had a look at one of those rocks and there doesn’t seem to be much holding it there, it might hold for another 20 years or it could collapse in the next storm.”

There have been no preliminary investigations or the commissioning of designs for immediate protection of the cliff face from the weathering of the sedimentary layers occurring at the cliff base which causes the overlying sandstone to topple.

The Board is calling for a meeting between Crown Lands, Council, the Office of Environment and Heritage which administers funding programs, and the Board to map out a co-ordinated and collaborative approach towards investigating and addressing the coastal cliff instability hazard.