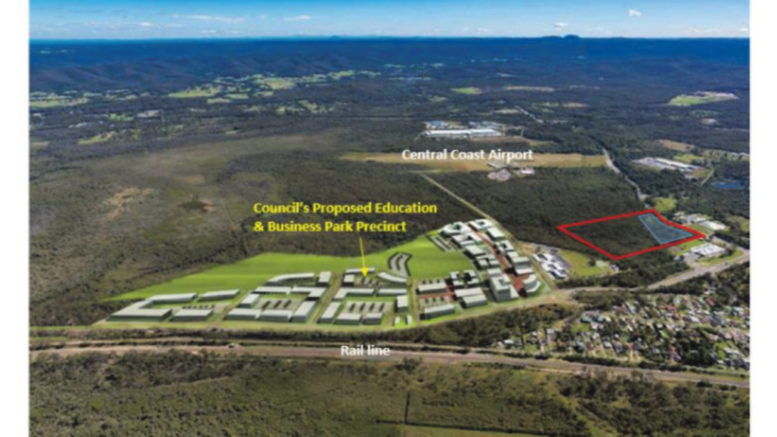 Central Coast Council and a Warnervale land owner face a third round in the Land and Environment Court over a development application to clear land at 130-134 Sparks Rd.

At the same time, the land is subject to a Supreme Court action.

The land owner won an appeal in the Land and Environment Court in July, which means the matter will go back for another adjudication some time in the future.

The court case was started in 2018 after council agreed in 2017 to rezone some land, but refused to allow the land to be cleared.

Pastoral Investment Land and Loan Pty Ltd had put in a development application to council to subdivide two existing lots.

Pastoral wanted to change boundaries to create two new lots that would align with the boundaries of the two zones applying to the site, one being Industrial and the other being Environmental Conservation.

Council agreed to the first part, to moving the boundaries, but it did not allow the clearing of native vegetation or any land use.

Council’s consent, on August 7, 2018, stated that there was to be no clearing of native vegetation nor was there any physical works or land use included.

Council said any future development would require further development applications that would include details for water, sewer, vehicle access, stormwater management and electricity.

Pastoral appealed to the Land and Environment Court on 5 November, 2018, seeking permission to clear the land.

Three days were set aside in March for the hearing.

The case started with a visit to the Warnervale site.

“The Senior Commissioner, the parties’ legal representatives and the parties’ experts, including ecologists, observed the boundaries of the site, the areas to be cleared of native vegetation, the different ecological areas and habitats within the site, the buffer zones proposed and the access points for construction vehicles,” the judgement states.

The hearing resumed in Court at the Land and Environment Court in Sydney later that same day and Pastoral asked for an adjournment.

Rather than allow the adjournment to give the company time to do the assessment, the court dismissed the case on a point of law.

The appeal was heard in June, and a decision was made in July to uphold the appeal.

And so the matter will come before the same commissioner at some time in the future.

It is expected that the ecological issues will be tabled at the next court appearance.

But meanwhile, the site is also set for a Supreme Court hearing.

The former Wyong Council entered into a deed of agreement with the landowner in 2006 which would have seen the majority of the site, the land zoned environmental, given to the Council.

In essence, the Deed sought the dedication of all environmental conservation land to Council, once part of the site was zoned to industrial.

It is understood that in October, 2018, Central Coast Council commenced action in the Supreme Court to enforce the Deed.

Council did not answer Chronicle enquiries, but it is understood that if Council loses the Supreme Court action, it is unlikely to get the 21ha at no cost.

The landowner would have the option of the land value being assessed, including any potential environmental credit value.

Chris Smith, who is a senior town planner at local consulting firm, ADW Johnson, which wrote the Statement of Environmental Effects for the subdivision, said the small portion of land was identified by the former Wyong Council and the State Government as suitable for industrial/employment land.

“Yet, to unlock it, it must be battled out in Court,” he said.

“Since 2008, Council has failed to deliver biodiversity certainty and failed to deliver critical lead-in infrastructure to get the Wyong Economic Zone (WEZ), this region’s greatest employment precinct, going.”

He said NorthConnex was about to open and the Coast would be caught flat-footed.

“Surely the dollars spent on lawyers and court to date could have been far better spent on replanting food source trees and habitat boxes,” he said.

Smith said that in the late 90s early 2000‘s, a decision was made to create the Wyong Employment Zone, and during the early 2000’s, Council commenced the rezoning process but failed to complete.

In 2006, the State Government stepped in and deemed the area a State Significant Site and completed the rezoning in 2008.

Circa 2006, a deal was struck for the rezoning and dedication of land.

“Fast forward 10 years later, and the landowner wants to complete this transaction, but before the dedication occurs, he wants the certainty that the land zoned industrial could in fact be cleared for the intended purpose.

“Remember, the balance of 21 ha will not be touched and will be kept as conservation lands,” Smith said.

“During this time, there’ve been at least 3 efforts to biocertify the WEZ, two attempts by council, but all have failed to complete.

“Thousands and thousands of dollars on both sides are now being spent in legal battles to effectively clear 2.8ha of zoned land from a 24ha site.

“How do ratepayers feel about that?”

Former environment writer for the Sydney Morning Herald, and now a Coast resident, Bob Beale, said the bush was finite.

“Death by a thousand cuts.

“Death by a million cuts.

“When will we ever learn?

“When will we, at last, start the process of reducing our footprint, of concentrating our impact into fewer places?

“The bush is finite, our plans must be too, or the outcome is obvious, inevitable and grim.”