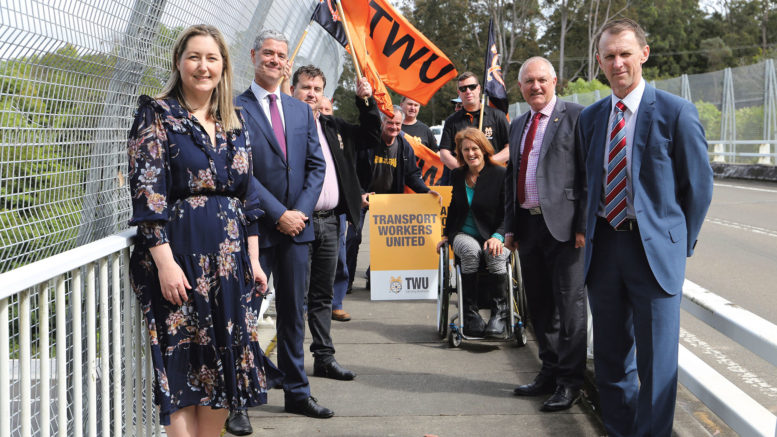 The Central Coast’s Labor MPs are ramping up their push for a one-month toll-free period when Northconnex opens to motorists later this year.

Shadow Minister for the Central Coast, David Harris, said Coast motorists stood to save more than $300 if the Opposition’s Toll Free Period Bill, expected to be debated in the Lower House this week, is passed.

“Central Coast residents had to put up with roadworks and disruption during the NorthConnex construction,” he said.

Harris and fellow MPs Member for Gosford, Liesl Tesch, and Member for The Entrance, David Mehan, met with Shadow Minister for Roads John Graham and representatives from the Transport Workers Union on the Coast on September 11.

“Truck drivers will be prohibited from using Pennant Hills Rd, forcing them to pay $23.73 for each journey through the new 9km tunnel, which would be $11,400 a year,” he said.

Member for Gosford Liesl Tesch said Coasties want the Premier to show leadership and “do the right thing”.

“It is safer and fairer to give drivers some relief, especially during a recession.” Tesch said.

“It’s just greedy to throw a toll at motorists the second the road opens – whenever that will be.”

“Truck drivers now have to choose between driving 244km without a rest stop and copping a $194 fine for using Pennant Hills Rd instead; it’s wrong,” he said.

Parliamentary Secretary for the Central Coast Adam Crouch said Northconnex would transform travel between the Central Coast and Sydney and motorists will always have a choice to use the new NorthConnex tunnel or continue using Pennant Hills Rd.

A Transport for NSW spokesperson said Northconnex would be tolled when it opens to traffic, consistent with the opening of the New M4 Tunnels and the M8.

“For freight operators, this will help boost productivity and support the movement of goods, with a straighter and flatter route for increased fuel efficiency and reduced wear and tear.

“Overall, the risk of a crash driving through NorthConnex is predicted to be around five times lower than on Pennant Hills Rd.”

Owners of privately registered vehicles who spend an average of $25 a week over a year on tolls are entitled to free registration as part of the NSW Government’s Toll Relief scheme.

The Government has also announced a new scheme which will see drivers towing caravans, boats and horse floats eligible for cheaper tolls.

The scheme will work by providing a rebate on the larger recreational vehicle tolls to bring the cost in line with regular cars.

Travelling via NorthConnex is a breeze