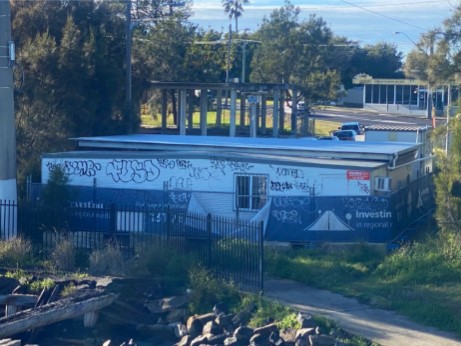 The entry into Toukley, with its ugly “ghetto” areas, was the target of a long debate at Central Coast Council’s September 14 meeting.

The Council eventually decided to write to the State Government to ask them to improve the look of the sites colloquially known as the Toukley Taj Mahal, the RMS Shanty Town, the old Toukley bridge and the abandoned and dilapidated Gorokan Fish Co-Op.

But as Cr Louise Greenaway pointed out, the former Wyong Council and Cr Greg Best, 14 years ago, first tried to get the area cleaned up so she was skeptical that this request would work.

Cr Best was not at the meeting to talk to his motion, which was deferred from the August 24 meeting.

Cr Hogan took him to task for denigrating the place with the motion that called the place a shanty town.

She suggested that perhaps Crs Best and McLachlan could muck in and help clean up the area.

Cr Holstein congratulated Cr Hogan on her comments but said he would support the motion as he was sympathetic about the problem.

A similar issue was hopefully being addressed with a property at North Gosford, he said.

Cr Doug Vincent reworded the motion, softening the wording and requesting, rather than demanding, that State Government Departments clean up their sites.

A member of the Toukley Action Group had addressed the public forum before the August 24 meeting.

Kathleen Watson said that she was a resident and a homeowner of the area and asked councillors what on earth they were doing to “this lovely part of the Central Coast”.

She said the gateway into Toukley was so disgraceful it looked like people were entering a ghetto.

“You think that by giving us a lovely park in which children play right next to this dangerous site, with the Vietnam park on the other side, is good enough for the people of Toukley and its visitors?” she said.

“It isn’t good enough and how dare you all subject us to this exposure.

“It is an accident waiting to happen.

“Don’t make the same mistakes as previously happened in Wamberal, ignoring the plight of residential houses falling into the sea, promising to do something for them for years.