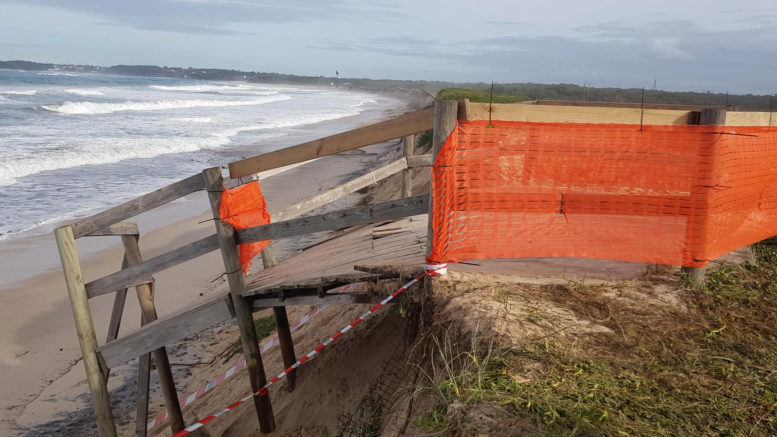 The public viewing platform at the north car park before it was washed away.

Budgewoi is being treated like a second rate cousin to places such as Gosford, Wyong, Somersby and other parts of the Coast, says a councillor.

Cr Jillian Hogan said the Budgewoi area had changed dramatically since a masterplan was drawn up in 2013.

Cr Hogan has been successful in calling for a review of the masterplan.

Her Notice of Motion went through at the Council meeting on Monday, September 14, with no debate despite council staff saying that there was no money in the budget for a review.

But Cr Hogan there was money in the budget, or operational plan as it is officially called, for a review and update of Gosford’s Streetscape Master Plan and for precinct plans to be developed for Woy, Woy, East Gosford, Erina, Gosford, West Gosford, Tuggerah, Wyong Town Centre and Somersby Business Park.

What about Budgewoi, Cr Hogan said.

“Residents are looking to Council to shape and plan the area,” she said.

“Although some works have been undertaken from the plan, such as footpaths, seating, park upgrade and signage, it is time to look at what has been done, what has changed since 2013 and what is possible.

“The population has changed, with more young families moving into the area who need to access schools, shops, beaches and parklands, yet there are few footpaths and little connectivity”.

Recently, the public viewing platform at the north car park was washed away by storms and at this stage, there is no plan to replace it, Cr Hogan said.

“The platform was designed and built by residents for the community, and If the viewing platform is not in the plan, it may not be replaced, and then it simply becomes history and a lost asset.”

The Budgewoi Masterplan was driven by the now defunct Budgewoi Precinct Committee just before the amalgamation of Wyong and Gosford councils.

Precinct Committees were set up by Council for residents to actively work with on projects and development of the area.

The masterplan was a collaborative process between the old Wyong Shire Council, an urban and landscape designer and the Budgewoi community.

The aim of the masterplan is to provide the vision, framework and actions to ensure that the area is well planned in the medium and long term.

Councillor Hogan said, “It is time for a review and an update of the plan that was written in 2013”.

Popular for its restaurants, water sports and bushwalks, Budgewoi is nestled between the lakes and the sea and surrounded by natural habitat.

Phil Heaton from Budgewoi Beach Dunecare said he would welcome a new Masterplan to include new ideas as well as shared pathways, the viewing platform and the continuation of tree scaping.

Cr Hogan’s successful resolution will see staff review and update the Masterplan, taking into consideration past recommendations, current knowledge of the area, current needs of the residents and tourists, pathway connectivity and the natural environment.

Cr Hogan asked that community consultation be meaningful and representative of a broad range of community interest groups.

Staff noted that the Notice of Motion recommended the use of operational resources for a purpose not currently planned or funded as part of the Council’s 2020/21 Operational Plan.

As part of adopting the 2020/21 Operational Plan on July 27, there were a number of decisions that impacted Council’s resource levels.

Staff said that these included actions such as managing excess leave, managing the recruitment of vacant positions and reviewing service levels.

Given the current resource levels, in order to deliver additional services, it will likely be necessary to reduce current services, staff said.

The staff recommended that councillors determine what corresponding reduction in service would be acceptable in order to deliver the actions set out in the Notice of Motion, or defer consideration of the matter to be undertaken as part of the formal quarterly review process to ensure consistency and transparency.

But in the end, Cr Hogan got her review.