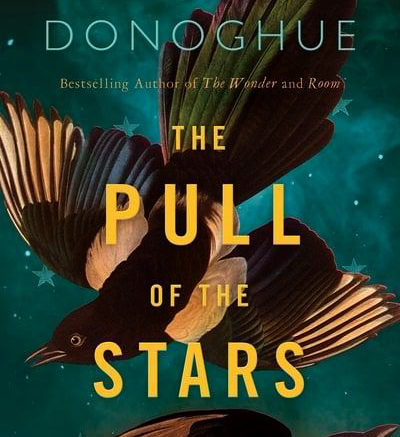 I can’t recall how I chose this book.

Maybe because the author also wrote Room, which I read a while ago and liked, although I was quite disturbed by it.

It may have touched my inner psychopath … but I digress.

There is war, there is poverty and there is Influenza (which perhaps explains the level of current interest in the book).

Julia works in a hospital and while the hospital survived the disruptions and shortages caused by the war it is not coping with the stresses caused by the flu – too many patients, too few staff.

Nurse Power is a midwife in the Maternity/Fever room – that’s right, not ward but room.

Until recently it was a supply room but has been converted to an area for expectant mothers who have caught the grippe (an old-fashioned term for influenza).

These mothers are exhausted, some are in their 20’s and have had five babies already. Nurse Power’s recalls, “There was a saying I’d heard from several patients that struck a chill into my bones: She doesn’t love him unless she gives him twelve.”

Julia has the day shift, while Sister Luke looks after the women at night and, like all the nurses which are in short supply, they are required to perform tasks well beyond any training.

We meet Julia on the eve of her 30th birthday.

Once she is 30, and if she meets the property qualifications, she will be able to vote in the UK elections, but not until after the war ends.

She lives with her brother Tim, who hasn’t spoken since he came back from the war.

Julia’s mentor has been Matron and Matron is a stickler for protocol, something that has rubbed off on Nurse Power.

But Matron is in the sick ward and Nurse Power is on her own.

She notes the patients she loses by etching half-moons for each one into her watch.

Because staff are sick, and the hospital is severely understaffed Sister Luke sends Bridie Sweeney to assist Nurse Power.

Bridie can’t answer truthfully when asked how old she is as she does not know her own birthday.

She has a sad back story and is basically an indentured servant to the church.

But she becomes an immense help to Nurse Power and the patients and, for her part, Bridie is given food and a bolt on the water closet door and hot water – things she has not seen much of in abundance in her life

Dr. Lynn, a GP has been brought in by the hospital to help with the women’s ward, she is labeled a “a socialist, suffragette, anarchist firebrand!” by the orderly.

She is wanted by the police for her part in the Rising and is hiding out in the hospital.

But she is a great doctor and trusts Nurse Power.

In fact Dr. Lynn gives Julia the authorization to give out medication, which is often just whiskey, and asks her to assist in an autopsy.

Emma Donohue started writing this book in 2018 and finished in March 2020.

While the other characters are works of fiction Dr. Lynn is not – she is a real figure, a suffragette, nationalist and activist for social justice who fought in the Easter Rising and was arrested and imprisoned.

Flu ravaged mothers give birth, not always successfully, Julie adds notches to her watch, friendships are made and lost.

The book’s chapters are titled Red, Brown, Blue, Black… the colours a patient with the flu will turn before they pass.

The Pull of the Stars is well written, with a strong narrative voice and presents some eerie historical parallels with the current global pandemic, with all the fear and suffering, the precautions and restrictions and, of course, the death.

“Another poster announces that ‘The government has the situation well in hand,’ and ‘There is no real risk except to the reckless.’ Meanwhile, schools and shops are closed, and those forced by necessity on to crowded trams regard each other with a volatile mix of fear and camaraderie.”

Donohue does a good job in creating a warm centre of female comradery in the middle of all the turmoil and despair.

I liked it, but like its predecessor, I was once again quite disturbed by it.

Book review – The Other Passenger