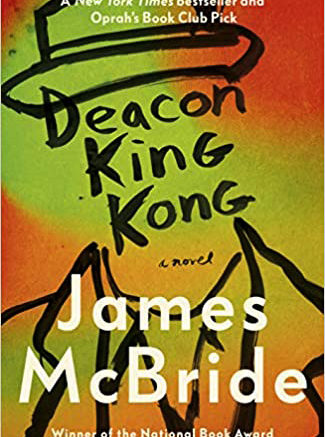 Causeway Housing Projects were built in South Brooklyn in the 40’s to house the Italians that worked on the docks.

But its 1969 and the ships don’t dock there anymore, so the Italians have left and the Cause Houses are now home to the colored and Latinos and, as of recently, the drug dealers.

Deems Clemens is one of these drug dealers.

But Deems wasn’t always a dealer, he used to play baseball and was coached by Cuffy “Sportcoat” Lamkin (who also taught Deems Sunday School).

But that was a few years ago.

Today, Sportcoat walks out to the plaza of housing project and shoot off Deems’ ear.

It was agreed, Sportcoat is now a dead man.

Sportcoat was a nickname given to him by his mother when he was five.

Now, in his early early 70’s and drunk most of his life, he is deacon at the Five Ends Baptist Church.

How he got the title and what the job actually entails remains elusive.

Sportcoat has a weakness for King Kong, “a special blend of white lightning” made by Rufus, a janitor at the nearby Watch Houses.

Sportcoat was married to Hettie but she has passed and, along with her, the knowledge of where the Christmas Club fund money is hidden.

For surely as Hettie’s husband he must know where it is … or he must have taken it.

As the story goes on, we meet the Elephant, Tom Elefante whose family has been in the area for years and his mother is still seen walking around looking for weeds to brew to heal her ailments.

She has hired Sportcoat to help her once a week to collect these herbs.

Elephant is a gangster that deals in stolen goods – the mob wants him to dabble in the drug trade but that isn’t for him.

He is nearing retirement and just wants to find someone nice to settle down with.

Potts, a world-weary but scrupulous white policeman who’s hoping to find Sportcoat fast enough to protect him from Deems’ vengeance, but the malevolent designs of neighborhood kingpin Butch Moon.

I think this quote from the book sums it up pretty well, “all living the New York dream in the Cause Houses, within sight of the Statue of Liberty, a gigantic copper reminder that this city was a grinding factory that diced the poor man’s dreams worse than any cotton gin or sugarcane field from the old country. And now heroin was here to make their children slaves again, to a useless white powder.”

There is all Cheese, there is Venus of Willdendorf, there are the Amazing Mets, an assortment of salsa musicians and there are characters named Pork Sausage, Bum Bum and Soup.

There are marching ants.

Is my synopsis getting confusing?

Well, it’s just a reflection of the rich and complex fabric of characters woven in to form Deacon King Kong.

They are all just people trying to navigate in a world that is changing around them, and not for the good.

There is kindness and tenderness, there is backstabbing and double crossing – as one reviewer describes it: “there is almost too much for one book to handle”.

But as The Good Lord Bird (2013) showed, McBride has a knack for turning complexity into brilliant, cohesive and very funny narrative.

The story goes off on tangents but then comes together with great finesse.

The dialogue is amazing, and I found myself laughing out loud at sections.

And it is quite touching as well.

Quite easily one of the best books I have read this year.

And there is that chapter, The March of the Ants … brilliant.