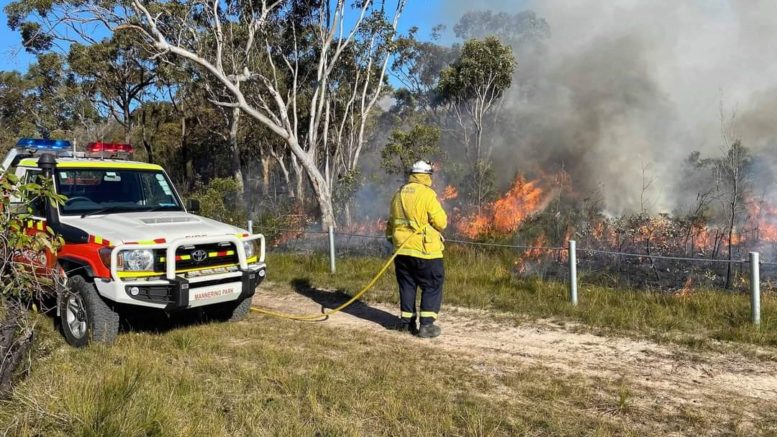 Bushland around Mardi Dam is the next location for bushfire hazard reduction following a controlled burn by the Rural Fire Service at Tuggerah on Saturday and Sunday, August 29 and 30.

“We were really happy with the way that went, the conditions were perfect, and crews have been doing follow-up patrols of the area,” she said.

Firefighters were called to a bushfire at the end of Yurunga Ave, San Remo, on Saturday afternoon, August 29, which was not part of the hazard reduction exercise.

Superintendent Campbell said the fire put up a lot of smoke and was quite visible with many people thinking it was part of the hazard reduction burn.

“The fire wasn’t “running” but sufficiently big enough that crews had to take it out to fire trail containment lines and it finished up being about 3ha in size, all up.

“The cause of the fire is unknown and Fire Investigation was out there on Monday looking for possible causes and Police have also been notified,” Superintendent Campbell said.

More hazard reduction burns are being done during this week at Holgate and nine hectares around Mardi Dam.

“Protecting our water assets, such as Mardi Dam and Mangrove Creek Dam catchment, is very important so they are a priority,” Superintendent Campbell said.

She said hazard reduction burns had been hampered over Autumn and most of Winter due to the intermittent rain.

“It’s incredibly limiting and we haven’t been able to get as many done as we would have liked by this time of the year.

“But we’ve got a window of opportunity with favourable weather at the moment, so we’re trying to do as many burns as we can.

“The District has about 40 burns on the priority list in our Plan of Works for the year and they are shared across all the fire agencies such as National Parks, Forestry, Fire Rescue and the Rural Fire Service.