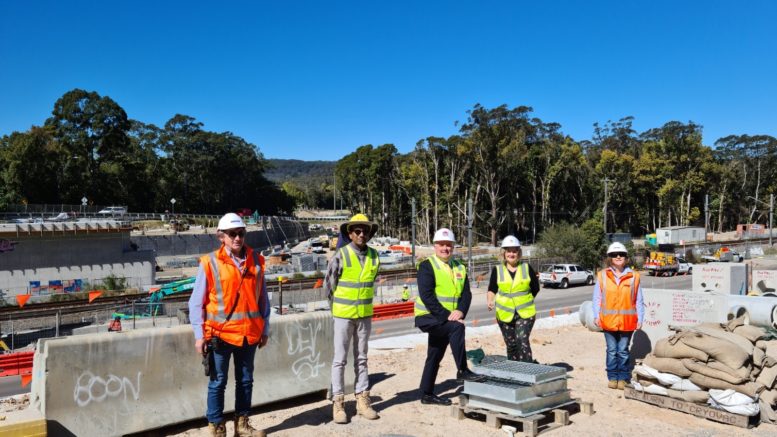 Work is on schedule and progressing well on the major $178M upgrade of the Pacific Highway at Lisarow which is providing an employment boost for hundreds of workers.

The highway is being widened to provide two lanes in each direction between Ourimbah St and Parsons Rd, as well as a new overhead bridge near Lisarow Railway Station.

It is a continuation of the $70M road upgrade of two lanes each way through Ourimbah which was completed late in 2018.

A key feature of the new 1.6km Lisarow upgrade is a new bridge across the rail line to replace the existing bridge at Railway Cres, and already 95 huge pilings and retaining walls have been built to support the new bridge.

Transport for NSW Regional Director North, Anna Zycki, said this project was one of the most challenging and complex.

“When we’re working in a rail corridor, works that we would normally do in a number of weeks, we have to completely re-think the planning for so that we can get in and do that work in sometimes 72 hours or even 48 hours,” she said.

Zycki said the timetable for trains on this busy main northern rail line had to be taken into account so the line could be closed and the work done quickly.

Parliamentary Secretary for Central Coast, Adam Crouch, said during an on-site visit on August 28, much had been achieved in the 18 months since the project started by contractor Daracon Group.

“It is powering along, with 50 percent of the above ground engineering work such as foundations and the massive pilings now complete, and more than 70 percent of the utility relocation work undertaken,” he said.

“This project is a significant employment opportunity, with about 1,000 workers from 156 companies employed on this site over the past 18 months, and a very large proportion of those have been Central Coast locals.

“On any given day, there are about 80 people on the construction site, which just goes to show what a significant flow-on effect this $178M project is having for the Central Coast economy,” Crouch said.

Next steps of work include earthwork for the new road, installation of stormwater drainage and building retaining walls near Lisarow cemetery and The Ridgeway.

The roadworks are also part of other major upgrades through the Ourimbah to Lisarow rail corridor including improvements to accessibility and car parking which is set to start soon at Ourimbah, Lisarow and Narara railway stations.