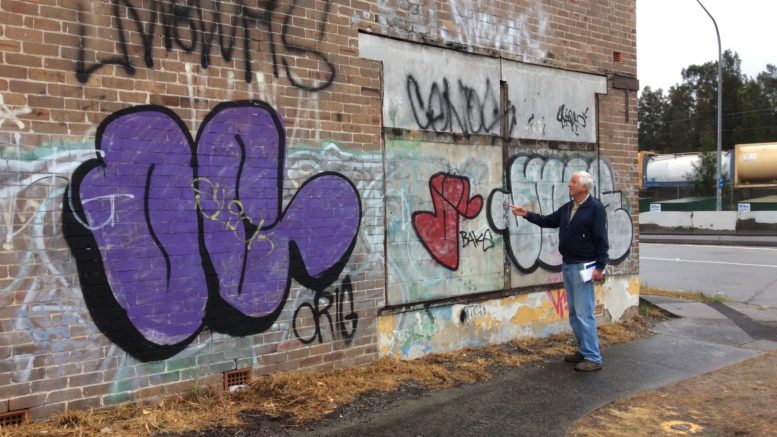 A draft Council strategy on graffiti claims that Woy Woy is one of five graffiti hotspots on the Coast, responsible for 6.6 per cent of graffiti reports to police in the region.

However, the strategy does not disclose the rate per head of population, nor does it report the figures for the Peninsula as a whole.

It does not discuss whether a higher reporting rate is the result of a higher level of community concern about graffiti.

The draft Graffiti Management Strategy for Central Coast Council is open for public comment until September 13.

The draft strategy states that the Council is only responsible for removing graffiti from its own property, and not from private property.

However, it suggests a trial program to remove graffiti from commercial properties in principal town centres, including Woy Woy.

Council director Ms Julie Vaughan said that the strategy would replace plans of the former Gosford City and Wyong Shire.

“The draft strategy is based on evidence about what works, reflects best practices in graffiti management and is the result of input from a range of local stakeholders.

“Not only does it aim to create a sustainable, significant and measurable reduction in graffiti on the Central Coast, it also looks at ways to increase community awareness and understanding of the issue and provide residents with legitimate avenues to express themselves creatively.”

Mayor Cr Lisa Matthews said that Council was committed to “working collaboratively with community partners” and developing programs that will make a difference in stamping out graffiti.

“This strategy seeks to reduce the negative impacts of graffiti felt by the community and visitors and increase pride in local areas.”