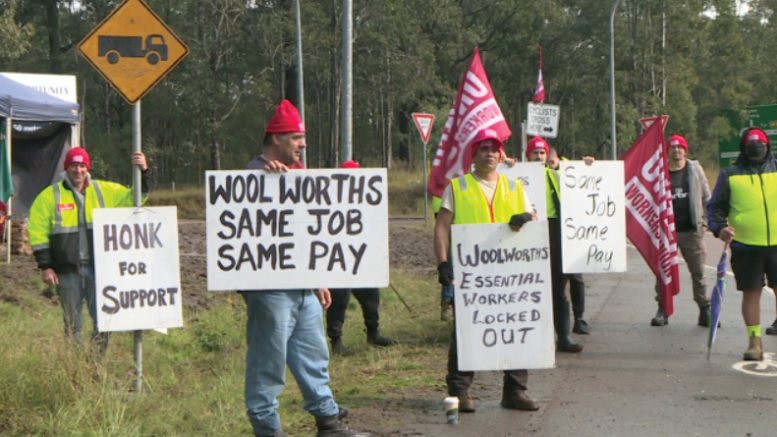 Workers at the region’s only Woolworths distribution centre were back on the job on Thursday, August 6, after reaching agreement with management on a range of pay and other issues.

Earlier in the week, Woolworths had announced an indefinite lock out of the 550 workers after talks broke down on July 30, but lengthy negotiations throughout Wednesday saw workers deciding to accept an offer from management, with lodgement of a final agreement yet to be made.

“Woolworths have agreed to a staffing ratio of 80 per cent permanent and 20 per cent casual except in peak periods, which was one of our major requests,” Donnelly said.

“They have also agreed to a staged pay rise over three years, with 4 per cent to be paid the first year, 3.5 per cent the second and 3.3 per cent the third.

“This isn’t quite the parity with Sydney workers we were after, but it’s pretty close.

“It still falls short, but the workers didn’t want a long fight.

“The pay isn’t quite where the workers wanted it, but with a lot of other issues resolved, they did quite well.”

Woolworths Chief Supply Chain Officer, Paul Graham, said the proposed annual pay increases over three years would deliver more than 12% over the life of the agreement.

There would also be an increase to allowances in line with the wage offer and back pay from the lodgement for approval with the Fair Work Commission.

Graham said redundancy provisions would be doubled to a maximum of 82 weeks (up from 40 weeks) in the event of a site closure and permanent team members would be eligible for 10 days domestic and family violence leave (5 paid; 5 unpaid).

Permanent workers would also be able to take up to two days paid leave if unable to attend work due to natural disaster and there would be three paid mass meetings of 30 minutes for all team members who are members of the UWU per year.

“We’re glad to have our team back at work and look forward to hearing feedback on the proposed offer,” Graham said.

“These have been tough negotiations, but we believe the offer we have on the table represents a reasonable compromise.

“The proposed offer will deliver improved pay and conditions to our hard-working Wyong team, while also maintaining the viability of the site in our network longer term.”

Graham said the site had taken supplier deliveries on Thursday afternoon and would start dispatching stock to stores from Friday.