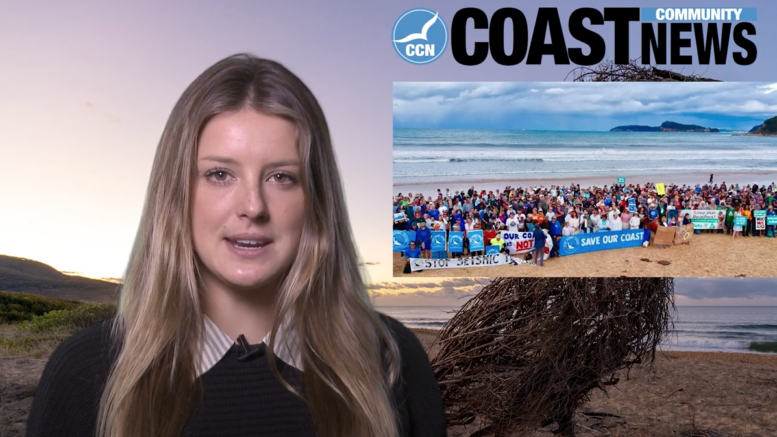 A man in his 50’s, who is now in isolation, travelled on a train from Woy to the CBD and back again on the 24thand 25th of August.

CCLHD is asking anyone who travelled on the following train services to monitor for symptoms.

Earlier this week the ABC criticised Local District Health for delayed reporting of the Southwestern Sydney cluster of seven Covid cases that was linked to workers at a Somersby Hydroponic farm. ABC reporter Jake Lapham had this to say.

Independent Federal MP Zali Steggall has called for an end to the PEP 11 permit for offshore gas exploration as community opposition to drilling offshore on the Central Coast continues to grow.

Advent Energy withdrew plans for seismic testing off the coast earlier this year following community backlash. But with PEP 11 due to expire in February next year, Advent Energy and partner Bounty Oil have submitted an application to The National Offshore Petroleum Titles Administrator to extend the title and change it to allow for drilling for gas.

Steggall told Federal Parliament many constituents had written to her with their concerns about PEP 11, which covers a huge expanse of the eastern coastline from the Sydney Basin to the north of Newcastle.

The Hunter Community Environment Centre will present evidence of heavy metal pollution in Lake Macquarie at a public hearing on September 1, as part of the NSW Government Inquiry into Coal Ash Waste Site Remediation. The Inquiry was established on October 1, 2019, to inquire into and report on the costs for remediation of coal ash repositories in NSW.

Co-ordinator, Jo Lynch, said the Centre had been investigating pollution from coal ash waste at Vales Point and Eraring power stations on Lake Macquarie and the findings would be revealed at the hearing to be held in Sydney.

A representative of Hunter Central Coast Coal Ash Community Alliance, Gary Blaschke of Lake Munmorah, is one of four speakers from across NSW invited to address the Inquiry.

And a new wave of construction looks set to hit the coast – let’s go to David for more on that.

Thanks, JC, yes plenty of new developments in the works for the Central Coast, and behind me is the site of one of 6 major sites about to kick into action.

The $150M mixed-use development will include 295 residential apartments, a 183-room hotel and commercial and retail space in three towers, ranging in height from 65m to 81m.

Across the road here, the $2million upgrade of the Central Coast Conservatorium of Music’s has begun, and, so far, restoration of the roofing, guttering, and sandstone cells has already been completed.

And Gosford CBD will also soon see work get underway on the new Regional Library, with Designs almost complete and a development application soon to be lodged with the NSW Department of Planning.

To the north end of the CBD, work on the $72.5M Central Coast Medical Research Institute (CCMRI) at Gosford Hospital is on track and is expected to open to its first students in 12 months’ time.

The facility will house state-of-the-art learning areas including simulation wards and laboratories that will be home to the future of healthcare.

Moving out of Gosford, a $178 million duplication of the Pacific Highway is in the works in Lisarow. This is in addition to a prospective upgrade of the Lisarow train station.

Parliamentary Secretary for the Central Coast, Adam Crouch, updated media this morning and was very upbeat on the outlook for both projects.

And finally, infrastructure works have commenced at Mount Penang Parklands, with the NSW Government laying the foundation for a thriving business precinct at Kariong, opening up thousands of jobs for the region. Adam Crouch was also on hand up at Kariong earlier this week and said the Hunter and Central Coast Development Corporation (HCCDC) would manage the works.

Baker street café located in the Gosford CBD has been recognised by the Daily Telegraph as one of the top 30 restaurants on the Central Coast.

The café was opened over a year ago by Chef Daniel and serves a range of different cuisines.

After having cooked all over the world with many notable chefs, Chef Daniel strives to show the positive effects good food has on a community and expresses his optimism about the future.

And Chicago-born, Bruce Eickleman, has gone against the COVID19 trend by opening a new pizza shop, called the Pizza Box, and said the business could not be better. We spoke to Bruce about yesterday about the inspiration behind the shop’s name.

Now let’s go to sport with Hayley.
Thanks, JC, things just got a little interesting in the Central Coast Rugby Union first grade competition with one draw, one upset, and a breakthrough win for Gosford in a Round 6 weekend of exciting rugby. In the upset of the round, Hornsby defeated ladder leaders Terrigal at The Haven Oval by 19 points to 9 in what many described as the best game of rugby this year
In other matches, Ourimbah and The Lakes fought out a thrilling 31-all draw. Avoca Beach beat Warnervale, and Gosford posted their first win of the season against Woy Woy.

And in basketball, the Central Coast Crusaders men’s team put on another impressive show last weekend defeating the Norths Bears 76 – 69. This win makes it six from six for the Crusaders, leaving them in first place on the 2020 Waratah 1 ladder.

Let’s go to Lucy now for a preview of the weekend’s weather.

It seems we can expect the sunshine to continue through the weekend, with a mostly sunny forecast ahead for Saturday and Sunday. There will be a maximum temperature of 21 degrees on Saturday with Light winds becoming north to north-easterly, with lows of 6 degrees overnight while Sunday will bring similar conditions with a high of 24 degrees and lows of 8 degrees. Temperatures may dip again then on Monday, with a max of just 19 degrees and a 20 percent chance of a shower.

And we leave you with some amazing images of the sculptures made by local Peter rush, who has been constructing large animal-shaped artworks out of debris washed up on the beach.

His latest crow sculpture on Killcare beach is among others so keep watching to see more. Thanks for watching.

Produced in Gosford in the CCN Studios.