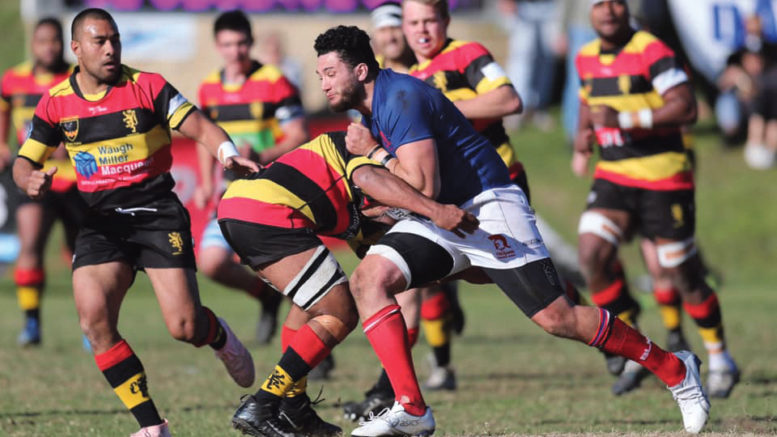 Things just got a little more interesting in the Central Coast Rugby Union (CCRU) first grade competition with one draw, one upset and a breakthrough win for Gosford in a Round 6 weekend of exciting rugby.

In the upset of the round, Hornsby defeated Terrigal at The Haven Oval by 19 points to 9 in one of the best games of rugby on the Coast for quite a while.

The first half was a very even, defensive struggle with neither side able to cross for a try and the half-time score of 9-9 was the outcome of a tense penalty shootout.

At that stage, the match was up for grabs.

In the second half however, Hornsby were able to penetrate the Terrigal defence to cross for two tries, leaving the Trojans supporters a little dumbstruck.

The Trojans were best served by fullback Adam Danckert and flanker Elekana Laupola.

The win by Hornsby also saw the team take home the Challenge Shield which Terrigal has held since 2018.

In the match of the round at Slade Park, a titanic tussle between minor premiership contenders Ourimbah and The Lakes ended in a thrilling 31-all draw.

Ourimbah got away to a great start with two early tries to go to a handy 14-0 lead, but The Lakes fought back to square up the score line midway through the second half.

Ourimbah then surged ahead again with another converted try and a penalty goal to go into the break with a 24 points to 14 lead.

Once again however, The Lakes rebounded with two more tires and a penalty goal of their own and, by fulltime, the teams could not be separated on the scoreboard.

The Lakes Lathan Hutchinson-Walters notched up 16 points with a try, four conversions and a penalty goal.

Over at Heazlett Park, Avoca Beach proved they will be in contention for the big games at the end of the season when they defeated Warnervale by 43 points to 15.

Avoca Beach led early but Warnervale wittled away the lead to just two points, 17-15, by halftime.

In the second half however, the Avoca Beach attack kicked into gear posting 26 points. To win comfortably in the end.

Avoca Beach locks Aiden King and Harry Layton were once again thick in the action, with centre Alex Halls, who scored two tries.

Warnervale were best served by hooker Cameron McNamara, who scored both his team’s tries.

The win sees Avoca Beach now placed in fifth spot and well within firing distance of the competition leaders.

Gosford proved too strong for Woy Woy at Gosford Showground, running out winners by 31 points to 21.

However, they certainly did not have it all their way.

Despite some penetrating rugby however, Woy Woy were not able to convert their pressure into points and it was Gosford who posted two tries in the second half to take away the competition points.

Gosford’s Under 19 prop Sulivenusi Hakalo had a strong game while Woy Woy’s Junior Stowers and Wade Hannell continued their fine form this season.

Round 7 marks the strat of the run home in the shortened CCRU season and several enthralling contests await.

Terrigal will host Warnervale at The Haven Oval next Saturday and the home team will be keen to get back into the winner’s circle.

Gosford will take on Kariong at Gosford Showground and, after posting their first, long-awaited win last week, may start as slight favourites

Ourimbah will be strong favourites when they travel to Woy Woy Oval to meet Woy Woy, however it wouldn’t be the first time a confident visitor was torn apart in the Lions’ den.