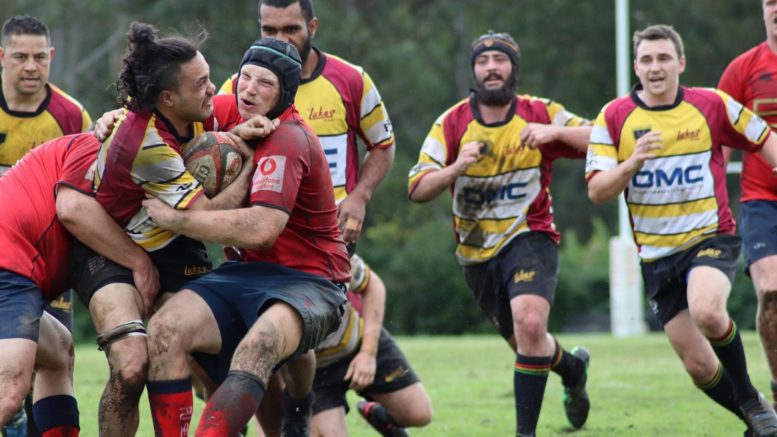 Rugby Union: Terrigal, Ourimbah and The Lakes remain neck and neck atop Central Coast Rugby Union’s First Grade competition ladder at the conclusion of Round 5.

The Match of the Day saw Ourimbah assert their dominance over Hornsby in a 32-12 point thriller.

Despite Ourimbah getting away on the scoreboard towards the end of the match, CCRU President, Larry Thomson, said there was nothing between these two sides for much of the first 60 minutes.

“Hornsby had the better of the opening exchanges and in fact took an early 12-nil lead.

“As it turned out, these two early tries were their only touch downs in the match, but it did take the visitors a long time to get back into contention.

“Ourimbah did reply with the lone try to Jack Stonestreet, before the break.

“It was a rugged first half and Hornsby may have felt they should have taken more points from it,” Thomson said.

Despite that, Hornsby did go to the halftime break leading by 12 points to 5, with Ourimbah taking their time to equalise and eventually assert their control over the proceedings in the second half.

“Ourimbah got stronger as the match progressed and were able to cross for a further four tries in the second stanza.

“It was a high standard match of rugby on display and both teams showed that they will be a force this year,” Thomson said.

Elsewhere, The Lakes also pulled off a victory over Gosford, albeit in much less controlled circumstances.

“Gosford took the early lead with a converted try to Josh McGlynn, but The Lakes gradually fought back and by the halftime break had taken the lead by 17 points to 7.

“However, Gosford returned the favour with some pleasing rugby and by midway through the second half, had locked the scores up at 17 points apiece, making it anybody’s match at that stage,” Thomson said.

With scores tied, a late penalty to The Lakes helped them edge out a 20-17 point win in what Thomson described as a phenomenal game of rugby in testing conditions.

“The match was played in very boggy conditions and this did not lend itself to free flowing rugby, but the standard of play was excellent,” he said.

The results sees both Ourimbah and The Lakes buckle down on second and third place on the ladder respectively.

First placed Terrigal also picked up a win over Kariong in Round 5 to secure pole position, but with just a point between them and Ourimbah, and the rest of the pack not that far behind at the halfway mark, Thomson said this season was shaping up to go right down to the wire.

“We’ve just passed the midway point of the season and interest is building on who’ll make the finals.

“All teams are competitive, and every match is hard fought,” Thomson said.

Gosford revival foiled by late penalty to The Lakes