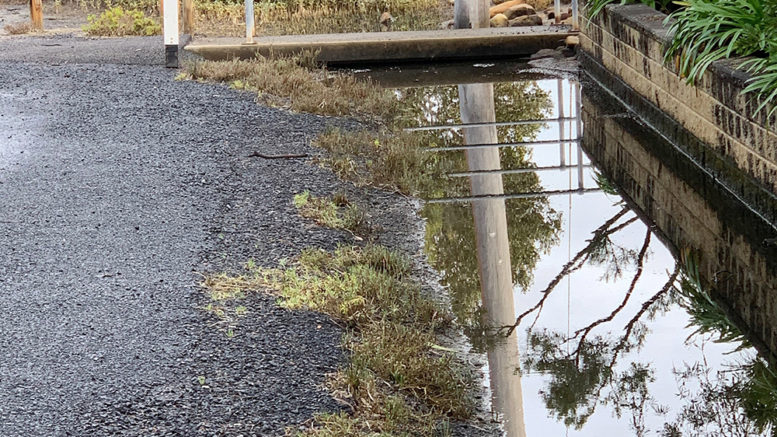 Central Coast Council will investigate drainage issues at Davistown and apply for any State and Federal funding available to help address the situation, which sees multiple streets go underwater every time it rains.

Cr Gale reminded fellow councillors that 415 homes were without a toilet or clean water for days earlier this year when heavy rains saw a failure of the sewerage system.

“The reports I heard were that elderly people were trudging through water to get to the portaloos Council provided,” she said.

“My concern when going through the Operational Plan was that Davistown did not seem to be mentioned in Flood Plain Risk Management plans.

“I know this is a low-lying area, but we need to take responsibility for these drainage issues.”

Cr Gale said her motion came off the back of responses received to a Question on Notice she had put to the previous meeting of Council.

“I would encourage staff to apply for any water infrastructure grants which might be available (from State and Federal Government),” she said.

“Council’s own minor drainage improvement fund might even get us over the line.”

Councillor Chris Burke seconded the motion, saying Davistown was “as flat as” and (drainage had) always been a problem.

“Over the years, drainage (at Davistown) has been a big issue and it’s about time we investigated the situation and see what Council can come up with,” he said.

Deputy Mayor Jane Smith questioned if the Floodplain Risk Management Plan now being formulated was relevant and asked for an update on its progress.

But Director Roads Transport Drainage and Waste, Boris Bolgoff, said a two-pronged approach was being taken to the plan, with his own department and the Department of Environment and Planning both working on it and he was unable to give an update on its progress.

With no further debate, the motion was passed unanimously.

Davistown Progress Association, which has long been campaigning for urgent action on drainage issues, said resident who were affected by “the constant local flooding and unpleasant muddy conditions” were pleased with the outcome.

“We hope to see short term fixes like unblocking drains and hope some of the longer term solutions like small automatic one way drainage gates can be looked at for the major tidal outlets around Davistown,” Association President, Jenny McCulla, said.

“We are also very appreciative that all councillors unanimously supported the need to look at issues here, that can be fixed now.”