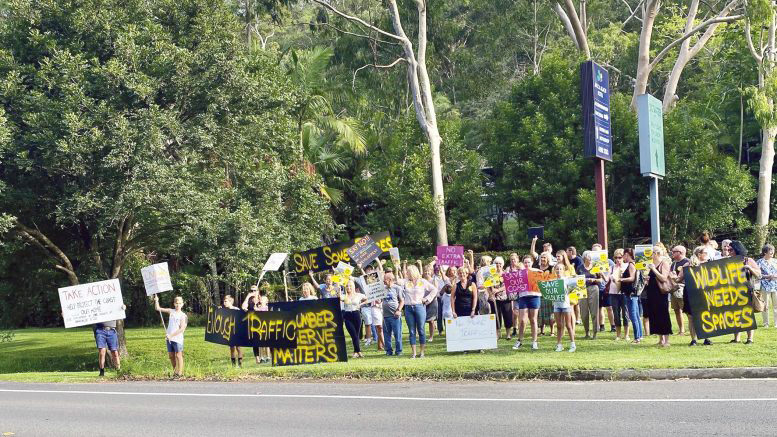 Residents staged an on-site protest over the proposal in February

Kincumber & Picketts Valley Community Action Group has claimed the rejection of a controversial plan for an over 50s residential development on environmentally sensitive land at Kincumber as a “victory for the community”.

It has been the subject of heated community opposition for months, with petitions and letters of protest lodged with Council.

The panel refused the application on a number of grounds, saying it was inconsistent with the area’s E4 Environmental Living zoning, would have resulted in additional stormwater run-off and increased downstream flooding, would have impacted the ecological values, visual and scenic quality of the area and would have been an overdevelopment of the site.

“Council officers did a thorough job exposing a raft of issues with the proposed development citing (amongst others) water catchment, potential contamination and pollution, flooding, heritage impacts, bush fire hazard and tree retention, loss of visual amenity contravening local character and the scenic buffer which is the intent of the E4 zoning,” Murray said.

“The importance of maintaining local green hinterlands for the health of surrounding eco systems, and maintaining the local character of the area, has always been a primary concern for the community.

“We just hope that Living Choice (the parent company of Choice Living Avoca) gives due consideration to the panel’s decision, goes back to the drawing board and proposes something significantly more sympathetic to the zoning of the property.”

“We are disappointed in the Panel’s decision which comes at a time when the Central Coast is struggling to provide employment opportunities in the area,” Goodman said.

“Obviously, those who have expressed an interest in Choice Living Avoca will be disappointed too as our research demonstrates the strong need for this product as the population expands on the Coast.

“It remains our view that the proposed development achieves a greater balance in providing suitable accommodation for a growing and aging population, whilst still retaining key wooded hillsides and green corridor linkages, and re-establishing watercourses to mimic natural conditions.

“We would have expected that the Central Coast Council officers tasked with assessing the application would have engaged in a more meaningful way.”

Workforce at Central Coast Council to be slashed by 242