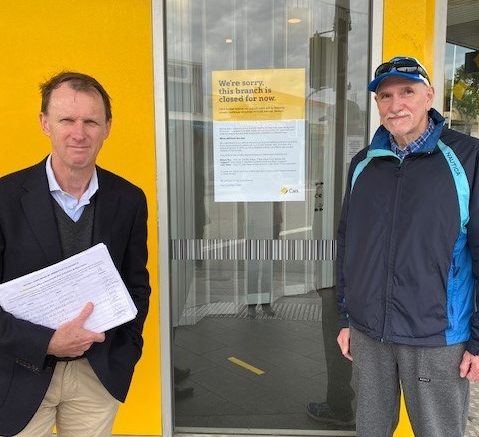 The Commonwealth Bank at The Entrance is still closed

More than 400 people have signed a petition prepared by The Entrance MP, David Mehan, calling on the Commonwealth Bank of Australia (CBA) to reopen the The Entrance branch.

The bank at 76 The Entrance Rd, was temporarily closed in May and staff were seconded to support the bank’s call centre to cope with the huge influx of customer inquiries through the COVID-19 crisis.

The The Entrance branch was one of 114 across the country to be closed temporarily.

“To minimise inconvenience for customers, temporary closures occurred at branches where another branch was operating normally within five kilometres,” a CBA spokesperson said.

ATMs at temporarily closed branches continue to operate as normal and customers can also do day-to-day transactional banking at Post Offices.

Mehan said that since the The Entrance branch closure, he had received complaints of long queues and extensive delays.

“Many people cannot access their banking electronically and find the logistics of travelling to their next closest branch tiring,” he said.

“My constituents need a local branch.

“It is part of their social connection to their community.

Mehan said he would continue to press CBA to reopen the The Entrance branch.

A CBA spokesperson said staff from The Entrance branch would continue in their reassigned roles supporting customers in the call centre.for at least the six month temporary closure and the situation would continue to be monitored..