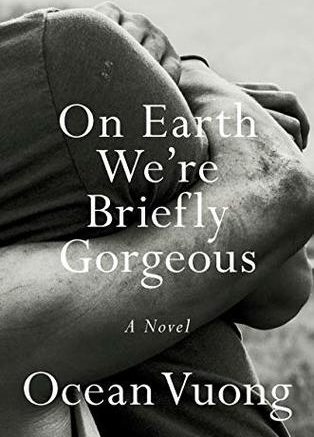 Ocean Vuong is a successful poet, so it is no wonder that he came up with such a lovely title for a book.

Although it is a fiction novel, much of the book seems to reflect Ocean Vuong’s life.

Like his protagonist, Ocean himself arrived to the US from Vietnam via a refugee camp in the Philippines.

Both have grandfathers that were soldiers serving in Vietnam during the war.

Both had to leave Vietnam when their mixed-race mother was not permitted to work under the new communist regime.

And both settle in Hartfold, Connecticut.

The story is told primarily in the form of a ruminating letter by the protagonist, Little Dog, to his mother, Rose.

(He writes even though his mother can’t read.)

“What I am about to tell you, you will never know … I am writing to reach you even-if each word I put down is one word further from where you are”.

Little Dog is a name given to him by his grandmother and, although he says, “I have and have had many names”, the only one he is referred to as in this book is Little Dog.

His grandmother called him this because she was raised in a rural village in Vietnam where “To love something, then is to name it after something so worthless it might be left untouched – and alive.”

With the choices being, demon, pig snout or bastard, Little Dog wasn’t so bad.

Hartford has seen better days, “the insurance companies that made us the big city had all moved out once the Internet arrived, and our best minds were sucked up by New York or Boston.”

The family arrives knowing no English.

Little Dog lives in a small apartment with his mother and grandmother.

His father makes a brief appearance, but only to beat his mother.

In turn Little Dog is beaten by his mother.

His grandmother suffers from mental illness.

It is chaotic in that little apartment.

He’s lonely and bullied at school for being different, for his foreignness and for what’s perceived as his effeminacy.

At 14, Little Dog gets his first job working on a tobacco farm where he meets Trevor, the 16 year old grandson of Mr. Buford, who owns the tobacco fields.

Trevor works to “get away from hid vodka-soaked old man” but is himself a product of reckless behaviours.

When Little Dog meets Trevor, he feels possibilities, “I was seen – I who had seldom been seen by anyone.”

While Little Dog is comfortable Trevor is not: “Trevor the hunter, Trevor the carnivore, the redneck, not a pansy, shotgunner, sharpshooter, not fruit or fairy.”

As the Guardian writes the essence of the novel, right there in its title, is the notion that “in early youth, somewhere beyond the margins of conventional society, there’s a brief authentic flowering of life and happiness, which can’t be carried forward into disappointing, grown-up, settled existence.”

While the rest of Little Dog’s contemporaries are getting high or dying of drug overdoses Little Dog pursues education and gets out of Hartford to go to school in New York.

The boy who came to America knowing no English becomes a writer.

Vuong’s family story is at the heart of his 2017 debut poetry collection, Night Sky with Exit Wounds, which won both a Forward prize and the TS Eliot prize.

There are some beautiful lines in this book, passages such as “Too much joy, I swear, is lost in our desperation to keep it.” and “I’m sorry I keep saying How are you? when I really mean Are you happy?” kept my highlighter busy.

In keeping with the theme of the novel, the writing is very in-the-moment, “ … from the two-hour drives to nowhere and a Burger King at the edge of the county, a day of tense talk with his old man, the rust from the electric razor he shared with that old man, how I would always find it on his sink in its sad plastic case, the tobacco, weed and cocaine smoke on his fingers mixed with motor oil …”

However, like poetry (to me at least), there were also some very fragmented and confusing parts – I’m still not sure how the explicit description of eating monkey brains was pertinent, but I really didn’t want to read it over again to find out.

This is the most bizarre letter written to a mother ever, but it is a book I keep thinking about and one I am glad I read.