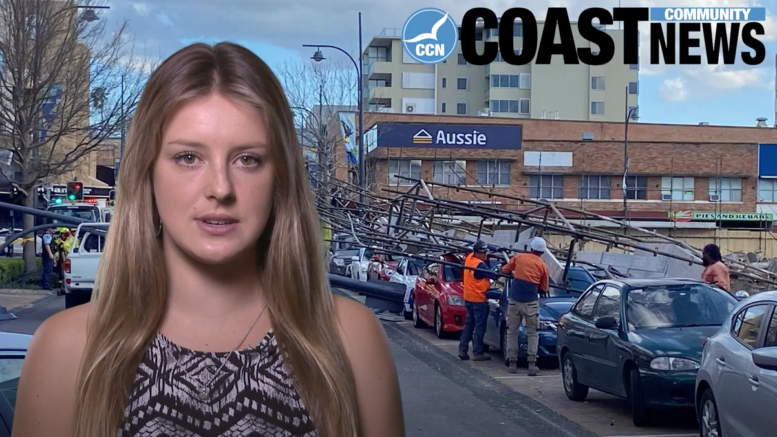 One person sustained head injuries and several others narrowly escaped serious injury when a wall of scaffolding collapsed onto eight cars in the Gosford CBD just after 3pm on Wednesday.

One man was lucky to walk away without serious harm when a light pole fell on the tray of his ute, narrowly missing the cabin.

The scaffolding had been erected as part of the new Archibald building site on the corner of Mann and Donnison Sts.

A NSW Ambulance spokesman said the woman, believed to be in her 40s, was subsequently taken to Gosford Hospital with a head injury.

The incident occurred during peak school time causing significant traffic to back up along the main roads in and around Gosford CBD.

Boaties, shoppers, commuters, and ferry operators all over the region are celebrating the beginning of major construction this week on the $5.6M Woy Woy Town Centre Wharf redevelopment.

Plans for the wharf was first mooted in 2009 and is the largest wharf project ever undertaken by Central Coast Council.

As well as a floating pontoon, the project will also deliver: a dedicated fishing area on the boardwalk; new seating benches including smart benches with mobile phone charging capability; banner poles; and landscaping.

Cr Chris Holstein was joined by Deputy Mayor Jane Smith, Parliamentary Secretary for the Central Coast, Adam Crouch, and Council staff for the official announcement and this is what they said about the project.

Ninety new jobs are on offer on the Central Coast, following the completion of major construction at the State Government’s multimillion dollar Kangy Angy Rail Maintenance Facility this week.

The purpose-built facility will service and maintain the New Intercity Fleet trains, with around six kilometres of electric rail lines – seven tracks across at its widest point – a new rail bridge, access roads, offices and amenities.

Minister for Transport, Andrew Constance, who was on the Coast to celebrate the milestone, said testing of the facility will continue ahead of the introduction of the New Intercity Fleet later this year.

Unemployment on the Central Coast is at an all time high – Fresh JobSeeker figures for July or what could be called the unemployment benefits statistics have arrived this week. There were 21,039 Central Coast residents registered for JobSeeker through CentreLink at the end of July, a slight reduction from June that had 21,056.

Data analytics firm See Change in Gosford has conducted a breakdown of the major figures and baked them in to current trends.

The divisions with the greatest increase in JobSeeker payments were Jilliby-Yarramalong and Killcare-MacMasters beach. The Umina-Booker Bay-Patonga division had the highest absolute number with 1834 registered residents followed by the Gorokan-Kanwal-Charmhaven division with 1757 registration.

It’s also worth bearing in mind that the jobseeker numbers are significantly higher than the unemployment data: Labour Force data suggests 7,630 unemployed on the Central Coast, yet jobseeker data shows 23,956 recipients of jobseeker and youth allowance benefits.

Also unemployment data suggests a decrease of around 800 unemployed between June and July, however the corresponding decrease in jobseekers plus youth allowance is only 94. With such confused datasets it’s challenging to understand the true state of the local labour market.

remember the Sustainable Industry showcase will be held on the 18th – 19th of September, so if you are a sustainable service provider or manufacturer, make sure you check it out.

If you happen to be around Putty Beach this weekend, make sure you check out Peter Rushe’s newest creation.

He has built an almost 2-metre-high Echidna out of wood and debris washed up onto the beach, with no plastic or glue holding the structure together, making it completely bio degradable.

The Central Coast Hockey Park, in Wyong has received much needed upgrades to its facilities with $600,000 provided from the State Government apart of the Stronger Country Communities Fund.

President of the Central Coast Hockey Association Brett Johnson is excited for the possibilities of what the new upgrades will bring to the club.

Parliamentary Secretary for the Central Coast, Adam Crouch is positive that the upgraded facilities will provide great opportunity for the athletes within the community.

And now to netball, with the Central Coast Heart pulling off another clean sweep in the Origin Premier League Netball Competition, with both the Opens and Under 23’s taking down the Sutherland Stingrays in spectacular fashion.

Heart Club Captain, Alisha Walsh, said the Opens’ iron defence proved to be more instrumental the longer the game progressed, with the Stingrays making a handful of errors off the back of long ball plays.

The Heart’s finished with a strong last quarter to win 58-60 and maintained their undefeated status for the season.

And the Under 23’s lead with a strong start to the game keeping the Stingrays with just 5 goals and two minutes to go in the first quarter, they were able to maintain this lead and take on a strong win of 50-44, leaving them in third place on the ladder.

It looks like this sunshine is here to stay. Saturday will be partly cloudy. With only a slight chance of a shower. Winds will be northwesterly 25 to 35 km/h tending westerly 30 to 45 km/h in the morning then decreasing to 25 to 35 km/h in the evening, overnight temperatures of 7 in Gosford and 3 on the mountain.

The cool temperatures continue during Sunday, Mostly sunny. Winds westerly 25 to 35 km/h with a maximum temperature of 17 and overnight lows of just 5 degrees.

All of these stories and thousands more are available on our website and remember to pick up a copy of this week’s Coast Community News issue number 256.

And we will leave you with a little snippet for you weekend.

Ettalong local country music singer, Jamie Lindsay, is dropping his full debut album Eleven in September, but he gave fans one last taste of what to expect with the early release of final single, Start Again, a song about staying positive in uncertain times.

Have a listen and thanks for watching.

Filmed in the CCN Gosford Studios.