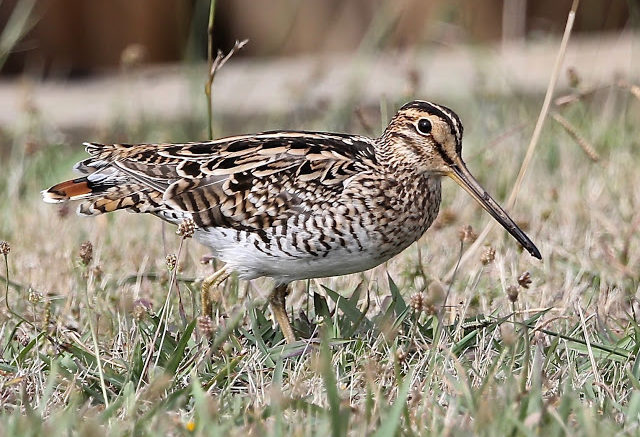 Every Spring, Latham’s Snipes arrive on the Central Coast after making an 8,000km journey from their breeding grounds in Japan.

One of the birds’ favourite spots is McPherson’s Rd Swamp, on the corner of McPherson and Gavenlock Rds, Tuggerah.

This cryptic bird is very difficult to see, says Allen Benson, spokesman for the Central Coast Group of Birding NSW.

“The view for most birdwatchers is its back, as the Latham’s Snipe zig-zags away after being flushed from the short grass on the edge of the swamp, so consequently, photos of this bird are highly prized,” he said.

“Unfortunately, the quality of both the wetland and the surrounding bush at McPherson’s Swamp has declined over the years, resulting in a reduction in both the number and diversity of bird species.

“However, the greatest threat comes from blue paspalum and pampas grass which can radically alter the entire habitat,” Benson said.

He said the Central Coast Group of Birding NSW has been liaising with Central Coast Council to reduce the impact of invasive species, with emphasis on blue paspalum and pampas grass, and now there is a management plan in place to gradually restore the habitat.

Benson says the bird list for McPherson’s Road Swamp is extensive and many interesting birds are seen there.

“Chestnut-breasted Mannikin are only just being seen again in what used to be a reliable spot for them.

“Spotted and Spotless Crake and Buff-banded Rail have been recorded, but conditions to sight them are far from ideal at the moment with so much water in the swamp.”

Benson said birders were always on the lookout for the rare sightings of Black-tailed Native hen, Painted Snipe, Black-necked Stork and Goldfinch.

The best access to McPherson’s Swamp is from Gavenlock Rd, opposite the church, and from there an informal track makes its way to the southern side of the main pond.