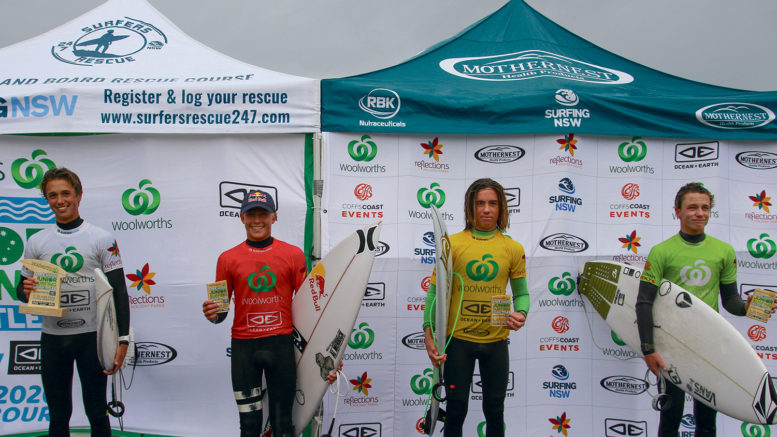 Lennox Chell (left) at the presentation

Avoca surfer Lennox Chell has taken out top honours in the Under-18 men’s division at the Woolworths NSW Junior State Titles at Sawtell Beach.

Chell, the goofy-footed dynamo and former Under-14 NSW Champion, put on a consistent display of backside rail-surfing in the final on Monday (August 10) to finish with a 12.93 two-wave heat total and claim the title ahead of fellow goofy-footer Jarvis Earle from Cronulla.

Earlier, over the weekend, Chell won his quarter-final with an impressive two-wave score of 17.33, one of the highest scores recorded for the event.

He then progressed through to the final after finishing second in the qualifying semi behind Earle.

Chell’s win in the semi was not without some dramas after his leg cord snapped and he had to make some quick repairs.

The Junior State Titles, which commenced last week and wrapped up on Wednesday (August 12), featured many of the State’s best junior surfers, all competing for a coveted state title.

“There was plenty of good surfers here, so I was really happy to get the win,” Chell said after the event.

The Woolworths NSW Junior Title pres. by Ocean and Earth has been a major organisational success having been planned and managed in line with the current strict public health orders and a detailed COVID safety plan.

Chell has a long string of titles to his name over many years of junior surfing.

Earlier this year, he set his sights on the State titles after taking out second place in the 2020 Carve Pro World Surf League Qualifying Series 1000 at Maroubra Beach where he was narrowly edged out by Angourie’s Dakoda Walters in the men’s final.

He will now set his sights on the Australian titles later in the year.