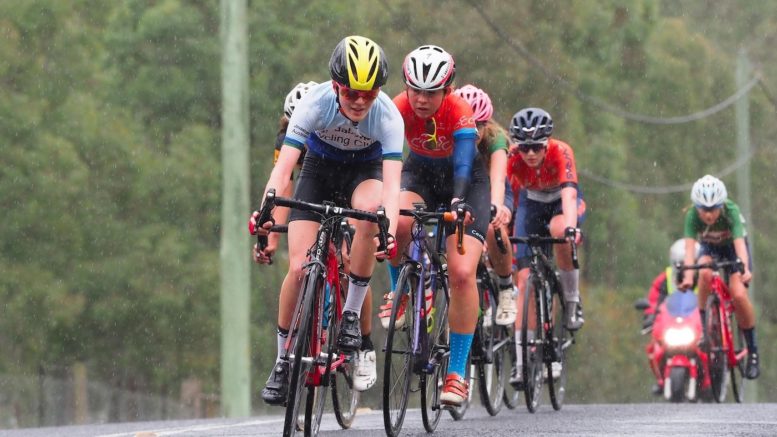 In a topsy-turvy year due to Covid-19 restrictions, several major events in the junior road cycling season have either been modified or cancelled, with elite competition only resuming in the past two to three weeks.

On Saturday, the Junior Tour of Sydney was held at Oakville.

Normally staged over three days, the event was held on one day as a 35.5km road race – five laps of a 7.1km road circuit, including a 2km hill climb – in the rain as it turned out.

Approaching the final stages, both Liliya and Nicole were well-positioned for the final sprint and it was Liliya who powered home over the top of the leader’s pack to clinch the win in what is becoming a hallmark for the young rider.

On Sunday, it was Nicole’s turn to shine.

The first event at Waratah Park in Sutherland was the NSW Metro and Country Road Championships involving 10 laps of a 1.5km circuit.

In amazing scenes, a group of six riders, including both Nicole and Liliya, broke away during the race only to come to a slow-motion, cat-and-mouse stand-off in the final lap.

One of the leaders eventually blinked and in the ensuing dash to the finish, it was Nicole who took out the win this time with Liliya placed fourth.

In winning the race, Nicole was crowned the NSW U15 Women’s Country Road Champion.

In the second event of the day, the NSW Junior Criterium Championships, which is held over a shorter 900m circuit at Waratah Park, the riders battled the cold winds and rain which arrived in force.

Once again, Nicole proved too strong in another close finish to be crowned NSW U15 Women’s Criterium Champion in the same weekend.

With their respective wins, both girls added to their tally of points toward selection in the NSW State Team ahead of the Junior National Championships which have been postponed to November.

The win on Saturday also gave Liliya enough points to be named the NSW winner of the National Junior Road Series.

Another strong showing by Liliya and Nicole in the NSW Road Race Championships in October may well see both riders selected together in what would be a great outcome for the girls and the Central Coast Cycling Club.