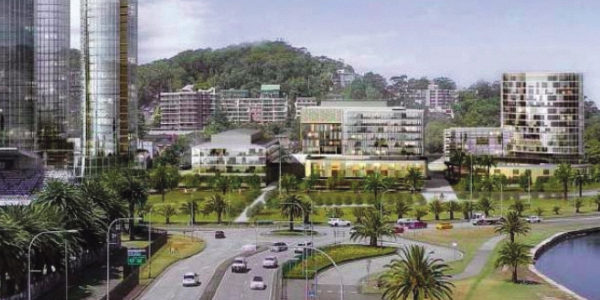 The Independent Planning Commission has approved the proposed multimillion-dollar Central Coast Quarter development for the south end of Mann St, Gosford, subject to a reduction in its bulk and scale to ensure design excellence.

But the Community Environment Network (CEN) is disappointed that the height of the development’s three towers will not be reduced to comply with the 48 metre height limit set by the State Environmental Planning Policy (SEPP) for Gosford City Centre.

The $150M mixed-use development will comprise 295 residential apartments, a 183-room hotel and commercial and retail space in three towers ranging in height from 65m to 81m.

It will be developed in three stages between now and 2025 and is expected to generate 375 construction and 75 operational jobs.

The NSW Planning Department finalised its assessment of the proposal in July this year and it went to the Commission for determination because of an objection from Central Coast Council.

They met with the applicant, the Department, Council officers and members of the CEN and conducted an inspection of the proposed site and surrounding area.

Issues raised by Council and community objectors included the design, height, scale and density of the building envelope, and its social and environmental impacts.

The Commission approved the concept plan subject to a condition requiring a reduction in the amount of permissible GFA (gross floor area available) in the northern and southern part of the building envelope.”

It said this would: reduce the visual impact of the development from key views to Rumbalara Reserve; reduce the bulk of the envelope and the visual impact for users of the newly upgraded major open space area, the Rugby League Field and reduce overshadowing of Rugby League Field, Poppy Park and Memorial Park as well as reducing the loss of views to Brisbane Water from surrounding residential apartments.

The Commission noted that a reduction in the envelope and gross floor area would also allow an increase in on-site residential car parking.

But CEN Executive Member, Michael Conroy, said it was disappointing that the three towers will exceed SEPP height limits by up to 70%.

“The SEPP only allows exemption from the height limit for developments that exhibit ‘design excellence’,” Conroy said.

“CEN is concerned that the IPC has approved a development that will still obstruct views of the Rumbalara Reserve ridgeline from the Leagues Club Park and Brisbane Water and still overshadow the Memorial Park.

“Furthermore, there is the potential for a wall of buildings from the War Memorial around to Brian McGowan Bridge that will obstruct the views between Rumbalara Reserve and Brisbane Water, as well as overshadowing Leagues Club Park for half the day in winter.”