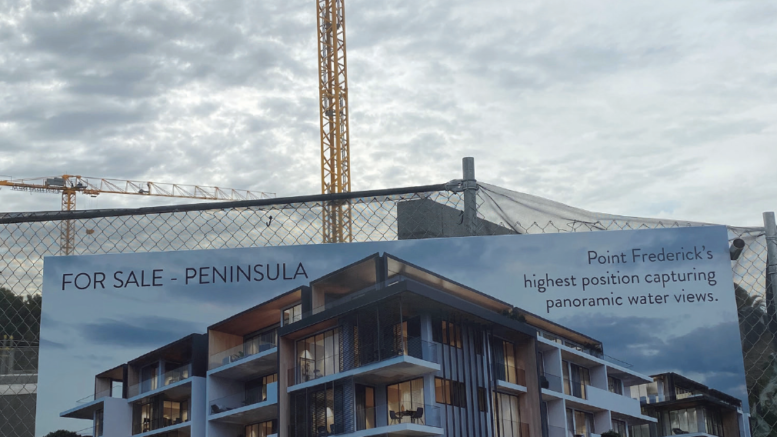 The for sale went up at the site two weeks ago.

One of the major developments slated for the greater Gosford area has stalled, with the multimillion- dollar Peninsula development at Point Frederick being put up for sale.

Approved by the Hunter Central Coast Joint Regional Planning Panel in 2017, the project is owned by developer Tony Denny’s Central Real, which has appointed commercial real estate firm Cushman and Wakefield to handle the sale.

The project, on the corner of Duke and Albany Sts, has been approved to house 101 units with two basement levels of parking and was originally costed at $34M. Cushman and Wakefield Director of Sales and Investments, Anthony Bray, said it has been completed to podium level, with the two parking levels in place and the slab poured at ground level.

“Mr Denny has decided not to continue on with the project after having seen a successful conclusion to his development projects on the Coast over the past seven years and deciding his skillsets are better used elsewhere,” Bray said. “There is no debt on the site and we are looking at a sale price range in the mid $20M bracket.

“The basement is complete – and that is a huge space providing 188 parking spaces over two levels. “The crunch point of a development is to have the basement complete.” Bray said the company was conducting inspections of the site with some “qualified interest” and estimated the project would take 12-18 months to complete, dependent upon weather conditions.

“There are five storeys yet to be built in three separate towers but all the approvals are in place,” he said. An information brochure issued by the company says the zoning of the site could accommodate aged care/ retirement/over 55s housing, child care or a hotel, motel or serviced apartments. The current approval is for 101 luxury one, two and threebedroom apartments and penthouses.

Denny appears to be winding up his real estate operations in the region, with his nearby Lumiere project also on the market. The residential building at 144 Albany St, Point Frederick, has an estimated cost of $19.86M and is approved for 39 three-bedroom luxury apartments. Bray confirmed the site would be sold.

“We have received genuine enquiry and are looking to exchange in the very near future,” he said. Attempts to obtain a comment from Mr Denny were unsuccessful.

I Got Rhythm II jazz workshop at Gosford

ETASC reports strong results from its Gifted and Talented Program