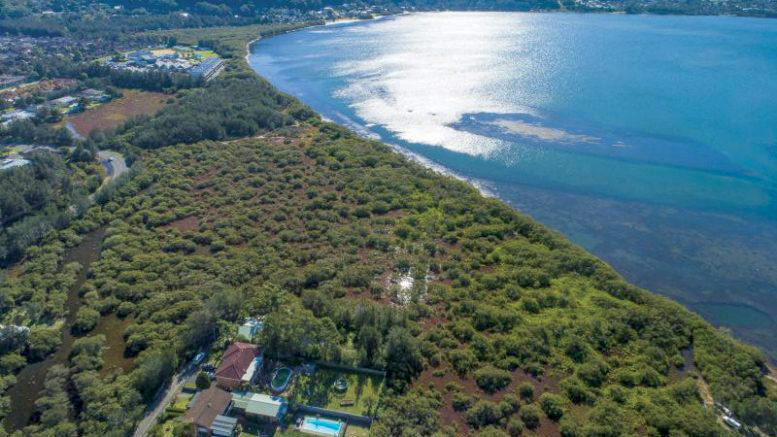 The area known as Davistown Wetlands Photo One Agency

Davistown Progress Association is irate that Central Coast Council will consider a recommendation at its meeting on August 10 to cease negotiations on buying the parcel of land known as the Davistown Wetlands.

The Council has been negotiating to buy back the land, which was sold to a private company years ago by the former Gosford Council, for several years.

But a recommendation from officers to be considered by councillors on Monday night would see negotiations cease, following a failure by the two parties to reach agreement on an amount that represents market value for the land.

Councillors will be told an offer from Council was hand delivered to W.T. Martin and Associates on May 25 following a second independent market valuation.

Another letter of offer was emailed to One Agency Platinum on May 26 in line with the first and second independent valuations obtained by Council but a representative of land owner Illoura Waters has advised that Council’s offer is rejected and offered the land for a price which Council says is “ not supported by the market evidence”.

With the size of the offers being kept confidential, Progress Association President, Jenny McCulla, said the community wanted more detail.

“I have spoken twice at Council on this and (the Association) collected over a thousand signatures last year asking Council to negotiate with the owners to get the wetlands back into public ownership,” McCulla said.

“They should never have been sold by a previous council 20 years ago.

“Council has voted unanimously twice in the past two years for negotiations to take place.

“Unfortunately, the parties appear not to have reached a point where either will compromise on the cost of the parcels of land.

“We are very despondent about this.

“The price of the land and its value has always been in question, ever since Tidal Shoals was advertised in 2018.

“We would like be assured that Council has met with the owners to seek proper discussions.

“We don’t wish to see Council take the compulsory acquisition route on some of this land if more, real discussion could bring forth a workable solution, but the land (is needed) for an essential public purpose – flood mitigation – and there are precedents of compulsory acquisition of wetlands for such purpose.”

McCulla said funds had been put in reserve in good faith by former councils to purchase at least some the land.

“Those funds came from sales of land in Magnolia Ave, Davistown, and elsewhere here, and should be spent here in Davistown, and definitely not to be absorbed into general funds,” she said.

“The people of Davistown will be very upset if Council can’t resolve this with some compromise.”

McCulla said acquiring the land was definitely in the public interest, despite comments in the Council report.

“(Buying the land) is absolutely necessary for flood protection of homes,” she said.

“Without that protection flooding, which is already a major problem, will get even worse.”