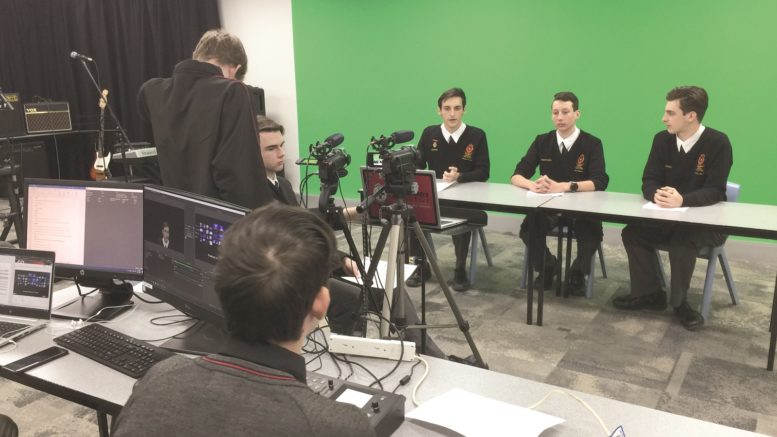 In a creative initiative to maintain school community engagement during these uncertain times, students at St Edward’s College, East Gosford, have started up a newscast called SECTV.

The fortnightly broadcast is hosted by the seniors studying Screen and Media and Entertainment and covers essential school information, broader community news, and global stories.

All content featured in the five TV broadcasts has been created and produced by the students, and Principal Mark Bonnici said he wants the project to continue as an ongoing legacy for the school.

“Those boys are doing the background producing work for it and have now come up with what you see now – a live broadcast every fortnight,” Bonnici said.

“They drive the content, and they come up with the pieces they want to present, which is all linked to the school’s touchstones.

“The touchstones provide an understanding of the values of what we are all about at the school.

“The boys have come up with this initiative to use this as a medium to promote things that we do around the school and promote awareness amongst our boys around global and local issues.

“We really want to challenge them to be citizens of the world and take a look at what is happening around them,” Bonnici said.

Previous topics have included the COVID-19 lockdown, the Black Lives Matter protests and racism within the local community.

The broadcast is currently being created within one of the classrooms, but the school hopes to continue the project further by building a TV studio.

“We have a large drama room, and we are going to be developing part of that drama room next year into a studio,” Bonnici said.

“You may have seen a photo where it is set up with a green screen behind it, well that’s a classroom.

“We have to take over that classroom in the two days leading up to it.

“I think the initiative is that good that I am willing to invest money into developing a studio next year if it continues.”

The initiative began during the COVD-19 lockdown as a YouTube-based channel which showcased weekly online school assemblies to students and parents.

Bonnici worked with the school’s 16 prefects over Microsoft Teams video calls every second Friday to develop the weekly broadcasts.

The content was generated at students’ homes and then arranged into a video. It even included interactive competitions and games such as offering prizes for the best video of a ‘trick shot’.

Bonnici said that as soon as school resumed, teachers and students decided the broadcast would be a great project to run alongside Screen and Media and Entertainment subjects offered in Year 12.

“We thought it was really important to come up with a way to keep the community feel going and also a way of touching base with families of what we are doing at the school,” Bonnici said.

“We have been trying hard with our prefect group because we have not been at school a lot and there are a lot of restrictions on what we can do.