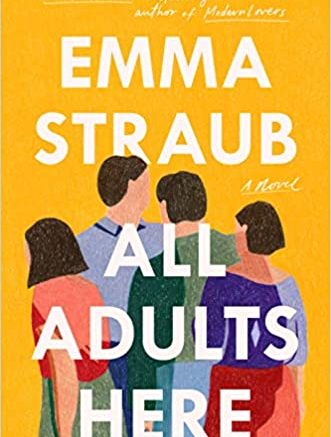 I finished a book called Grown Ups a few weeks ago and now I’ve just read All Adults Here.

Given the number of birthdays I have had I would say that I am a grown up, an adult.

However, shouldn’t adults be able to poach an egg? Source a decent mattress pad?

Sometimes I feel like I am pretending to be an adult, and someone is going to call me out soon as a fraud.

As the book All Adults Here points out “so much of becoming an adult was distancing yourself from your childhood experiences and pretending they didn’t matter, then growing to realize they were all that mattered and composed 90 percent of your entire being”.

Barbara Baker is hit and killed by an empty, speeding school bus.

Astrid Stick, a 68 year old widow, is sitting in her parked car when she witnesses the accident.

Astrid and Barbara knew each other for over 40 years, however Astrid did not like Barbara.

The incident greatly affects Astrid and she seems to become obsessed with all things Barbara.

She also starts to question how she raised her children and takes steps to become closer to them.

Her husband died when the children were entering adulthood.

For the past few years, she has been in a relationship with Birdie Gonzales, her hairdresser, who owns Shear Beauty.

She hasn’t told anyone about this relationship, but Barbara’s death has made her realise that life is too short.

“There was no time to waste, not in this life. There were always more school buses.”

Elliot is her eldest son and is married to Wendy.

They have over-active three year old twins and also live in Clapham.

Elliot is up-tight – years ago, when his father was still alive, he overheard his parents talking about him in a not so flattering way, and now he carries this around with him.

While he became a builder, some would say successful, he is still trying to over-compensate.

Her daughter, Porter, also lives in Clapham and owns a goat farm and makes cheese.

She is single and pregnant by a sperm donor.

She is carrying on an affair with Jeremy, her high school boyfriend who himself is married with children.

Nicky, Astrid’s favourite, lives in Brooklyn with his French wife Juliette and their daughter Cecelia.

Nicky was in a movie when he was in high school and became an instant teenage heart throb.

However, he turned his back on Hollywood and became a hippie.

Nicky and Juliette have shipped Cecelia off to spend the school year with her grandmother. Cecelia feels she has been abandoned by her parents.

Astrid reminded me a lot of Olive Kitteridge – someone in their later years that regrets their relationship, or lack thereof, with their children.

On the most part the writing was enjoyable however as the story went on, Straub threw so many social issues into the mix that it became clunky and confusing.

I found myself having to go back and re-read sections as I just could not figure out what was going on.

It’s just didn’t go that way for me – the characters are just a little too cliché and superficial.

As for the all-important ending, what can I say?