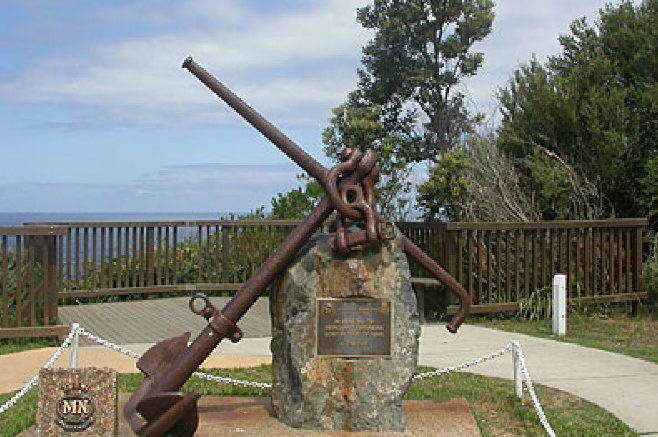 Unit Commander of Norah Head Marine Rescue, Bill Hignett, said the memorial would honour the 20 ships and their crews in the Air Sea Rescue service that operated in the Second World War and up to 1966.

“We’ve been told by people at the War Memorial in Canberra that this one at Norah Head would be the only memorial to these ships and crews,” he said.

“We also wanted to tie in with the Merchant Mariners’ Memorial on the headland near Norah Head lighthouse.

The mariners’ memorial is on a platform overlooking the sea where ships sank off Norah Head and many lives were lost during the Second World War.

A memorial service is held every year on the first Saturday in December in tribute to those merchant seamen.

“We’ve been doing some research and going through our archives and found some wonderful rescue stories and photographs, including one of people on the beach with their raft after being saved from one of the vessels in 1942,” Hignett said.

The Air Sea Rescue servicemen who conducted these search and rescue operations will now be honoured with their own memorial in Mazlin Reserve.

The plaque will be on a sandstone base/plinth at the southern end of the reserve near the intersection of Bungary Rd and Maitland St, alongside Norah Head Marine Rescue base.

Funding for the purchase and installation of the plaque has been provided through a Federal Government grant and Norah Head Marine Rescue will meet ongoing maintenance costs.

A $9,443 grant came from the Saluting Their Service program, which aims to honour the service and sacrifice of Australia’s service men and women in wars, conflicts and peace operations, as well as promoting appreciation and understanding of the role they played in shaping our nation.

Another group to receive funding under the program was The Entrance-Long Jetty RSL Sub-branch.

They will receive $3,920 to build a new war memorial at Shelly Beach Surf Life Saving Club, dedicated to surf lifesavers who have served in the Australian Defence Force.

A further $2,692 will go towards installing a display cabinet, construct a viewing deck for the artillery piece and install security cameras at The Entrance-Long Jetty RSL Sub-branch Museum.