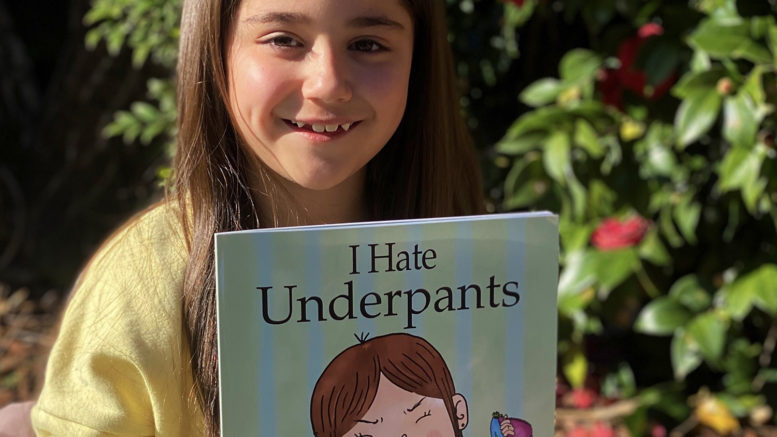 Leanne Fedele’s daughter Layla was the inspiration for the book

Leanne Fedele of East Gosford has gone from parent to international author with the publication of her first children’s book, I Hate Underpants.

The picture book was picked up by the publishing company Austin Macauley and now retails in a range of major bookstores around the world.

The storyline revolves around a young girl who dislikes everything to do with putting on underwear, tapping into every parent’s morning struggle of trying to get children ready for the day.

“The book is about a little girl, Layla, who hates underpants and every day is a struggle choosing between her underpants as they are either too big or too small,” Fedele said.

“A lot of kids hate getting dressed in the morning or having to get out of the house fast.

“In the end, the mother has enough and throws all the underpants in the bin.

“Then her grandmother comes and saves the day by knitting her custom-made fancy underpants.”

Fedele said the book had also been used to help young children with sensory issues around clothing.

“It wasn’t written for that, but some people have read it and thought that is was really good and really useful,” she said.

The inspiration for the work came from Fedele’s own experience with her young daughter Layla.

“My daughter was really picky with underpants, so we bought a million pairs like the dad in the book, and I had enough and ended up throwing a lot out,” she said.

“One night, I thought I would write a book for her fifth birthday, so I wrote it and ended up showing it to a few people who told me to write a manuscript and send it to some publishers.

“I didn’t think much would come of it, but it ended up getting published two years later.

“[My daughter] finally has her book in her hand.”

Fedele has worked in the early childhood industry for 16 years and has always had a love of writing and reading to children.

“I used to read a lot of books with the kids, and I used to get into it a lot,” she said.

Publishing I Hate Underpants has given her motivation to carry on with other projects.

“I am pretty excited about the next one,” Fedele said.

She has scheduled a range of author readings at local childcare centres, schools and libraries around the Central Coast to help with promotion.