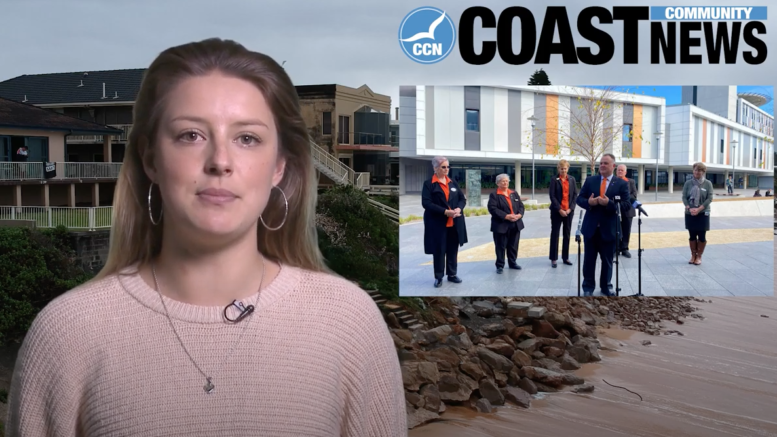 Wild weather and powerful tides have caused chaos along our shorelines in recent days.

There were reports of a 6-metre swell, resulting in a number of beachfront homes in Wamberal and elsewhere at risk of structural collapse after tides carve away large sections of beach.

Infrastructure has also been threatened at The North Entrance, Umina, Killcare and Avoca.

This is not a new phenomenon, with this image from 1978 showing Wamberal homes collapsing into the sea some 42 years ago.

Director for environment and planning at Central Coast Council, Scott Cox, was asked by the ABC earlier today why construction has been allowed to continue on the beachfront despite the risks and this is what he had to say.

Construction on the region’s first dedicated Palliative Care Unit will begin this year at Gosford Public Hospital thanks to a commitment from the State Government, announced yesterday.

The 10-bed unit will be located in the old maternity ward and is expected to be operational by the end of the third quarter 2021 with tenders set to go out in coming weeks.

The announcement follows an eight-year campaign led by the community advocacy group, the Elsie’s Retreat Committee, which is supported by the Lions Club of Wyoming East Gosford Centennial.

Elsie’s Retreat committee member, Oana McBride, explained that having the unit at Gosford Hospital was the best model for ongoing funding.

There was more exciting news for Warnervale residents this week with the first works beginning on the new town centre.

Thanks JC, a significant step forward for the Warnervale Town Centre happened this week with Civil works being started at the site.

They’re expected to be finished by October, ready for construction to start soon after on the retail and commercial facilities.

In addition, the Central Coast Council will deliver a water and sewerage upgrade to the centre following the provision of an $8.5M funding package from the NSW Government.

I talked to Member for Wyong, David Harris, earlier this week about the milestone.

Shadow Minister for Central Coast, David Harris, said it was totally unacceptable that more than $100M of the $250M Stronger Communities Fund Tied Grants program had been redirected in this way.

Gosford MP, Leisl Tesch had these thoughts on the matter.

And we understand the matter has been referred to ICAC and the Auditor-General.

Finally JC, we learnt this week that there may be some invaders on the Central Coast with a penchant for fishing and sun-baking. No, they’re not Victorians, but in fact Bachelor seals.

The male seals are thought to be staking out new territory for suitability and are usually followed in later years later by the females.

Thanks David. We reported in last week’s edition of Coast News that the Central Coast has a new life saving service with the arrival of Blood Bikes Australia – a group of volunteer motorcyclists’ who courier blood and other lifesaving supplies between hospitals and medical centres.

The group was started up in Australia by avid Queensland biker, Peter Davis, who took the inspiration from Blood Bikes in the UK and Ireland.

The Coast now has six volunteers ready to help but Davis is calling out for volunteers and health providers to get involved.

There’s a big weekend in sport ahead with the resumption of the A-League.

Thanks JC, yes, long suffering Mariners fans will be hoping for a stronger post-Covid showing from the blue and yellow tomorrow night when the A-League competition resumes.

The club confirmed on Monday (Jul 13) that a maximum of 4,500 fans will be able to attend Saturday’s clash against Perth Glory at Central Coast Stadium, although Members will have first dibs.

Jack Clisby spoke to media this week and said he’s been counting down the days.

In rugby news, the 2020 season will kick off this weekend and features matches between Kariong and The Lakes.

Both clubs have new coaches who will be keen to set a winning tone.

In other matches, Ourimbah will pay Warnervale and Terrigal take on the Lions in Woy Woy.

Unfortunately the Premier 1 competition will commence without The Entrance and Gosford, who have been casualties this year of the Covid-19 shutdown.

Back to you JC.

Thanks Ross, let’s hope the weather holds up – let’s hear from Lucy.

Thanks JC, and despite all the storm and rain earlier in the week, the weekend should be a little brighter.

The Forecast for Saturday is for a partly cloudy, with a small chance of a shower in the morning and light south-westerly winds of 15 to 25 km/h.

Gosford is expected to have a minimum of 8 degrees overnight and a maximum of 18.

Sunday promises to be mostly sunny, with light winds and a maximum of 20 degrees.

It should be noted however that large and powerful surf conditions are expected to remain hazardous over the weekend so best to leave the board in the shed.

Thanks Lucy, and we close this week with some good news from the Central Coast Conservatorium of Music.

Conductor & Artistic Director, Patrick Brennan, who almost severed his left hand with a circular saw in May is out of hospital and beginning a long process of recovery.

His rehabilitation coincides with the first stages of rehabilitation of the iconic Conservatorium building itself, on the corner of Mann Street and Georgiana Terrace.

Thanks for watching, we’ll see you next week.