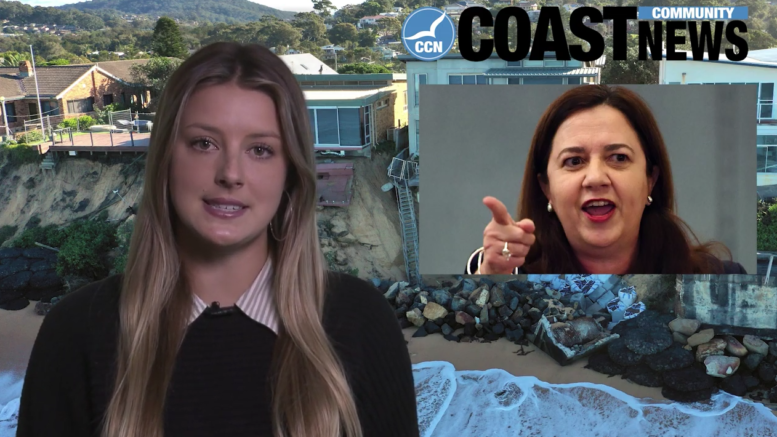 Central Coast Mayor Lisa Matthews advised she has put in a call to the QLD premier to correct her classification and reverse her decision in respect of Central Coast residents.

The Entrance MP, David Mehan, said this demonstrated why we need to be recognised by the state government as our own region, while Terrigal MP Adam Crouch agreed and also said he found the decision “bizarre” given the Central Coast has been COVID free since May 20.

Meanwhile, Central Coast Local Health District (CCLHD) has reassured residents that a Central Coast resident who recently returned from overseas and is in isolation in Sydney after testing positive for COVID-19 poses no risk to the Coast.

In the wake of recent storms and beach erosion, 260 rock filled bags have been placed in front of the most affected areas along Wamberal Beach, as a temporary fix.

The effort has exhausted the countries supply of rock bags meaning and there is now a wait for more bags to be imported from Japan.

And in breaking news, the NSW government today announced it will establish a Wamberal Taskforce to deliver a long-term solution to the coastal erosion issues at Wamberal Beach.

Minister for Local Government Shelley Hancock was at Wamberal this morning and made it clear the long-term solution was the construction of a terminal protection structure, a.k.a. a sea wall.

More than 500 workers at the Woolworths Distribution Centre at Warnervale undertook a 24-hour, industrial stop work action last week after negotiations over pay and conditions broke down.

The workers were demanding pay parity with workers who do the same job, for the same company, in Sydney.

Yes JC, David Mehan attended the stop work action and had this to say from Parliament house yesterday.

Well, it’s been a big week for Central Coast Council who finally approved the 2020/21 Operational Plan and Budget on Monday night.

The budget included increases in fees and charges for many council services – that’s in addition to CPI-linked rate increases approved a few weeks ago – as well as the shelving of several lower-priority capital projects in order to ensure the Council lives within its mean.

And In what was a very fiery meeting, the Mayor had to use her casting vote to approve the Plan which projects a $13.3M deficit this coming year, following an expected deficit of over $40M in 2019/20.

The series of deficits is natural given the impact of Covid-19 and spiralling amalgamation costs and has, so far, being funded out of reserves built up from previous years’ operating surpluses, although, as Gary acknowledged, that can’t continue indefinitely.

In an interesting twist, Councillor Troy Marquart was unable to attend the meeting on Monday night.

He provided a statement to us this week to say that he would have voted “against” the Operational Plan, which could of course have triggered a very different outcome

And finally JC, there’s been new developments with the Warnervale airport.

The NSW Government announced this week that it would support all recommendations of an independent review into the Warnervale Airport (Restrictions) Act 1996 which includes immediately repealing the flight cap limit.

Currently, no more than 88 aircraft can take-off and land during 6am and 10.30pm in one day.

Planning and Public Spaces Minister, Rob Stokes, said that there was an overwhelming response from the community, with more than 75 percent of submissions received during the review supporting the repeal of the Act.

Terrigal Public School has donated $2,735 to Milton Public School on the NSW South Coast. after the town was ravaged in the Black Summer Bushfires earlier this year.

The school raised the money by running an end of Term 2 Crazy Hair Day and staff also contributing to the donation.

Now let’s go to Lucy for sport and weather.

Thanks JC, Round 2 in Central Coast Rugby Union produced some close games with The Lakes edging out Avoca Beach by just one point, 15 to 14, and Warnervale beating the Lions 18-10 at Woy Woy Oval.

The Terrigal Trojans welcomed Gosford back to the Premier 1 competition with a 30-10 drubbing at the Haven.

And the Central Coast Mariners secured the dubious honour of a fourth wooden spoon in five years after successive draws, first against the Newcastle Jets and then against the Western Sydney Warriors over the past week.

We should have a full weekend of sport ahead JC, with both Saturday and Sunday to be mostly sunny with light winds and a maximum temperature of 19 degrees.

Well, for those of you feeling that the world is being consumed by dark forces, there is hope – a Force has awakened you might even say, with the making of a new Star Wars series, Obi-Wan.

[Show some of the trailer]

Long ago, on the remote planet of Tuggerah, a Coastie by the name of Luke, established Australia first and only lightsaber theatre combat facility.

And for the past five years, Luke has been working on producing his own film and I caught up with him this week to see if we could restore some balance to the Coast.

That’s all for this week, make sure you grab a copy of Issue #253 hot off the press today for all these stories and may the force be with you.

Presented by Jacinta Counihan with David Abrahams and Lucy Eljuga, filmed and edited by Alex Herget, produced by Ross Barry.

Another damning report on the NBN rollover process