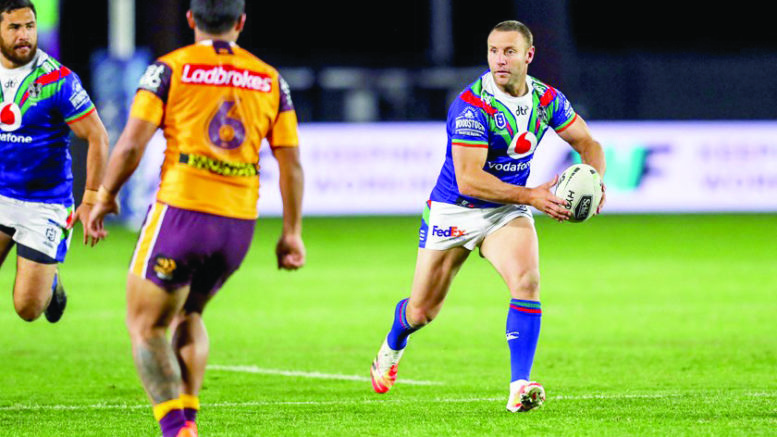 The Central Coast’s NZ Warriors came from behind to snatch an exciting 26-16 victory over the hapless Brisbane Broncos at Central Coast Stadium on Saturday night (Jul 4).

The Broncos skipped out to a 10-0 lead after 27 minutes courtesy of two tries to winger Xavier Coates, one coming at the end of a 90 metre dash after latching onto an intercept.

Warriors playmaker, Kodi Nikorama, was sidelined early with a head knock and his absence, together with a string or errors, prevented the Warriors gaining any early momentum.

In the shadow of the half-time break however, winger Ken Maumalo powered over the line to touch down and put the Warriors back into the contest.

In the second half, some deft kicks from half-back Blake Green, standing in as captain for the suspended Roger Tuivasa-Sheck, steadied the ship and saw the New Zealanders dominate field position before Agnatius Paasi crashed over to put the Warriors in front.

But it was not long before Brisbane’s Herbie Farnworth pounced on a towering bomb from Anthony Milford to put the visitors ahead once again, 16-12.

Blake Green then pulled off a raking 40-20 and set up a try for David Fusitu’a, only to be denied by the video referee.

The Warriors lifted in the final stages of the match however, to pile on three tries – the first to hooker Wayde Egan, the second a highly acrobatic finish by Maumalo and the final try to Isaiah Papali’l, set up deftly by Green.

Maumalo had been try-less for the season up until this match, so his double against the Broncos came as a longawaited drought-breaker.

The win leaves the Warriors in 12th place on the NRL ladder with three wins from eight rounds and means they are still unbeaten in their three home matches at the Gosford Stadium.

It was also the first win for fillin coach, Tom Payten who took over stewardship of the team after the unexpected sacking of Steve Kearney two weeks ago.

For the Broncos, it’s their sixth straight loss and leaves them floundering in the room of selfreflection.

Victory is sweet, especially when it comes at the expense of Queenslanders.

This week the Warriors face the Titans on the Gold Coast (Friday, Jul 10) commencing at 6pm.

A win could push them closer to the edge of the top eight.

New BreastScreen van on the road