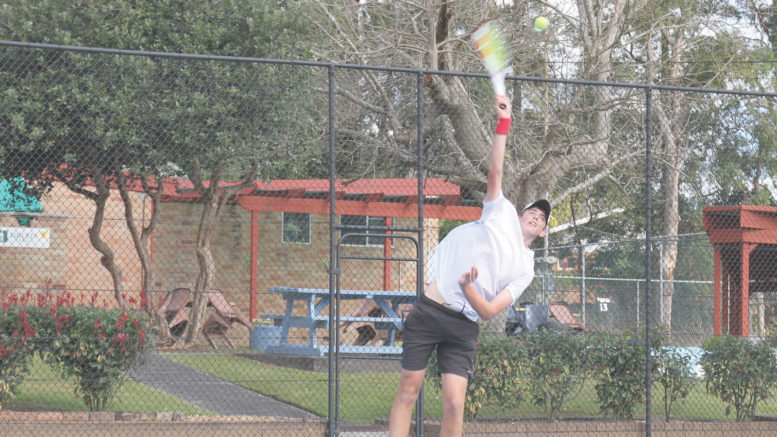 The pair traded blows for over an hour in overcast conditions before De Vivo prevailed 6-3, 7-5.

The tournament is a new initiative of the GTC to host an elite mid-year event, with most metropolitan venues closed due to Covid-19.

Over 150 players, boys and girls, registered for the tournament across three age groups, U12, U14 and U18, with a large cohort of players coming from Sydney and some from as far afield as Canberra.

De Vivo was in strong form, pounding his first serve and forehand groundstrokes to both sides of the court.

Courtney produced some stunning shots of his own and at times, looked to be gaining the ascendency. But De Vivo finished strongly on his home court to take out the tournament.

In the U18 womens, Jessica Jeong from The Entrance produce some dazzling tennis to defeat Wyong’s Mika Hosoi 6-3, 6-3, while The Entrance’s rising star, Isobella Wang was too strong for Susannah Su 6-0, 6-3 in the U14 girls.

The U12 final also produced some amazing tennis, including an enthralling battle between Gosford’s Kelly Leeming and 10-year-old Flynn Coventry Searle from The Entrance.

Searle appeared to get the better of Leeming in the first set, before the youngster rallied to take out the set in a tiebreaker 7-6 (10-8).

Leeming then took control in the second set to cruise home 6-2. Maria Gorval defeated Bailey Kent-Duggan 6-2, 7-5 in the U12 girls tournament.