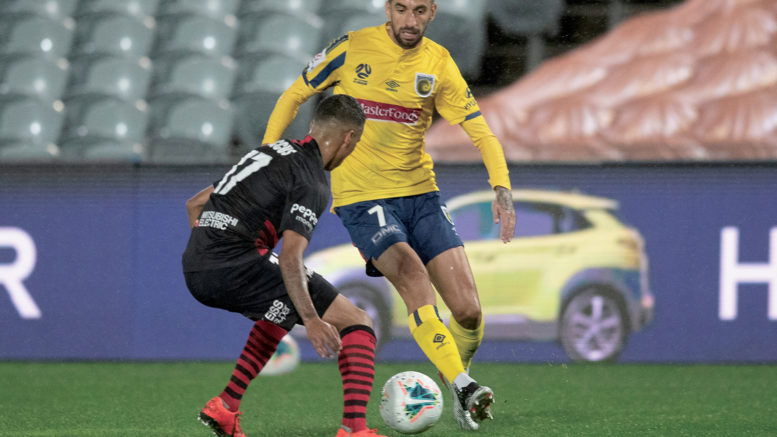 [Football] The curse of Central Coast Stadium prevailed on Monday night (July 27) when a late goal from the Western Sydney Warriors’ Simon Cox denied the Mariners a win.

The 1-1 draw means that the Mariners winless run has now stretched to 13 matches and confirms their fourth wooden spoon in five seasons.

Both sides created opportunities in the first half, including a heavy strike from fullback, Tate Russell, that was narrowly diverted by Keeper, Mark Birighitti, shortly followed by a similar, long-range strike by the Mariners’ Milan Duric, that beat the Wanderers goal keeper only to cannon off the woodwork.

Western Sydney’s Mitch Duke was lucky to avoid a red card in the 35th-minute after a reckless challenge on Ziggy Gordon.

It was the Mariners who drew first blood midway through the second half, when local hero, Matt Simon, headed a cross from Tommy Oar onto the boot of Duric, who finally found the back of the net.

It was only in the 88th minute of the match that a Kwame Yeboah cross found the head of Simon Cox, fresh off the bench for the Wanderers, who guided the ball into the corner of the net to salvage a draw.

The Wanderers are now in 9th place on the A-League ladder, four points out of the top six, albeit with a game in hand.

On Friday evening (July 24), the Mariners also eked out a 0-0 draw against F3 derby rivals, the Newcastle Jets, at Central Coast Stadium.

The draw all but snuffed out any semi-final aspirations of the Jets, who now sit in 8th place on the ladder, 3 points adrift of the top six.

In a contest of limited creativity, Newcastle had most of the possession in the first half, with former Socceroo, Bernie Ibini, making a few incisive attacks into the Mariners’ box.

After absorbing most of the pressure however, it was the home side’s young attacking star, Sam Silvera, who showed great speed and footwork to get a shot away, forcing the Jets’ Lewis Italiano into a vital save.

Kye Rowles and Milan Duric also had shots on goals, but its was the Jets’ youngster, Kosta Petratos, who probably had the best chance to snatch the match late in the second half before being denied by a desperate save by the Mariners’ Mark Birighitti.

In other highlights, Sudanese teenager, Alou Kuol, showed flair in his debut for the yellow and blue in a promising sign for the future.

The 19-year-told Fox Sports’ Robbie Slater after the game that he was very excited to play in front of the home crowd and had big aspirations for the remainder of the season.

“Obviously [to] win firstly and secondly score a goal man – rifle one into the top corner,” he said.

With one remaining match against Melbourne Victory on August 3, the Mariners will rue another forgettable season in which they’ve so far managed to post just 23 goals in 25 matches, while conceding 53 goals, an average of 2.1 goals per match.