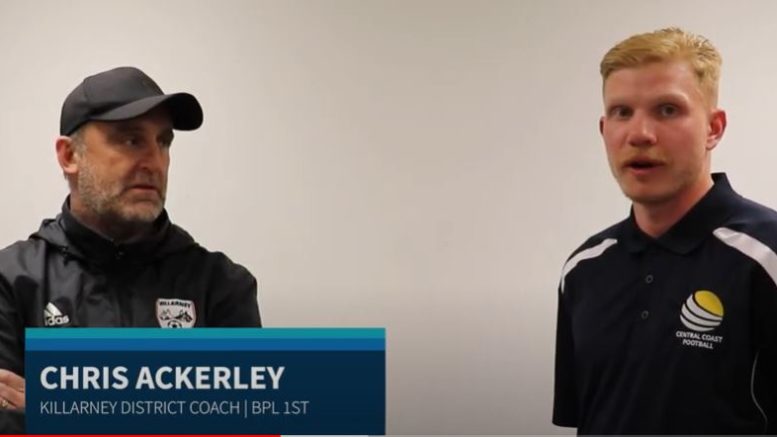 Chris Ackerley in interview by CCF.

The two teams are sitting in equal first on the competition ladder after strong performances in Round 3.

Killarney District started their game against Southern and Ettalong United with a bang, scoring in the first minute and setting the scene for what was to be a highly energetic match.

Despite the rocky start for the away side, Ettalong’s efforts did not go unnoticed as they fought hard to create many scoring opportunities, only to have their efforts just miss the mark.

Killarney District snuck in another goal just before the first half drew to a close, showing their ability to bounce back with bite after their loss, last round, to Terrigal.

Ettalong’s James Lepre was able to score twice in the second half after a series of great leads, bringing both teams neck and neck, but in the final minutes of the game, a depleted Ettalong allowed Killarney District to slip the match winning goal past them in an impressive display.

Woongarrah’s fixture with East Gosford was another exciting affair played on slippery terrain.

Woongarrah created some opportunities early on in the match that were hitting wide, before Kane Woolston’s shot from the penalty area was able to meet the net and set the trajectory for the rest of the game.

Woolston would then score again from a free kick outside the 18-yard box only five minutes later, taking the away team into halftime on a 2-0 lead.

The second half hosted some disjointed play aided by undesirable field conditions, but that did not stop the scoring, with Woongarrah netting a goal midway through the half, before East Gosford retaliated with a stunning shot from the penalty zone.

After a series of smooth and accurate passes, Woolston went on to score a hat trick for his team, taking them to 4-1 and eventually winning the match 4-2. In other matches, Umina defeated The Entrance Bateau Bay 1-0, while Wyoming defeated Berkeley Vale 1-0 as well.

The surprise of the round however was Kanwal Warnervale’s one-all draw with Terrigal. The Rovers were eager to be back on the pitch after their washed out game the previous weekend, while Terrigal were aiming to hold on to their winner’s status heading into the fixture.

The first 30 minutes of what was a very tight contest saw Terrigal struggle to create chances until the quick-footed Zach Allen ran home a goal after creating space in the penalty area.

Kanwal-Warnervale struck back 10 minutes later after a push from a Terrigal player granted the Rovers a penalty that was converted into a goal.

Two Kanwal players were then red carded after raised elbows to their opposition, jeopardising their chances for the rest of the game.

In the second half, Terrigal continuously pushed into their opposition’s half but repeated scoring attempts were denied by Kanwal’s robust defence.