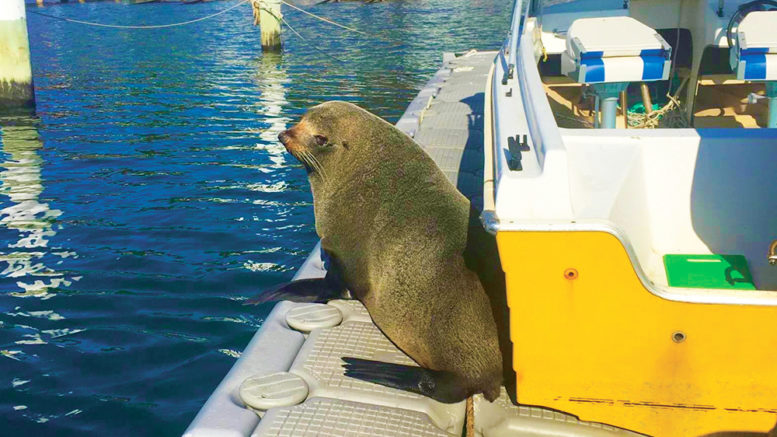 This chunky boy popped in to say hi at Koolewong Photo: Lynne Mather

Some unusual visitors of the flippered kind have been spotted around Central Coast waters in recent weeks.

They have been monitoring several seals for quite a while and sightings had been recorded in recent weeks at Point Clare, Tascott, Koolewong, Woy Woy Bay, Avoca and Copacabana.

“These seals are part of a bachelor seal colony at Barrenjoey and often venture to the Central Coast and sometimes onto Brisbane Water,” Ling said.

With the official name of Pinnipeds, which means flipper foot, there are three sub species of the semiaquatic marine mammals; fur seals and sea lions, elephant and leopard seals and walruses.

“There were seals all up and down the east coast 250 years ago, but they were virtually wiped out in the early 1800s following European colonisation,” Ling said.

“They are starting to come back and there are several colonies along the coastline.

“The Barranjoey colony consists of up to 15 long-nosed fur seals.

“These are almost sexually mature male seals known as bachelors and they explore and extend territories.

“Sometimes they are joined by smaller seals who are around five years old and are serving an apprenticeship as they learn to hunt fish, squid and penguins.

“While they are based at Barranjoey, the seals will often go exploring to check out what’s to eat and we are hoping that within 7-10 years we may start to get females there as well.

“There is just one breeding colony in NSW at the moment – at Montague Island off Narooma – but the bachelor colonies are setting up all along the coast claiming lands for possible future breeding.”

Ling said some seals follow the fish out of area, but monitoring of the Barranjoey colony showed that many were returning.

“This is a great sign they are setting up a new residence,” he said.

Ling said it was important never to try to touch, pat or feed the seals.

“These are wild animals and can be unpredictable,” he said.

“You shouldn’t go closer than 40 metres, but it’s perfectly safe to enjoy them from a distance.”

Ling said the mammals were most likely to be spotted sunning themselves on rocks or jetties in daylight hour.

“They are nocturnal feeders,” he said.

“They party all night and sleep all day – much like teenage boys.”

The Central Coast Dolphin Project encourages residents to send in any pictures they might take of the seals to help with the monitoring process.